How can I reduce dark circles

This helps with dark circles

Tired, stressed, exhausted: Dark circles under the eyes are often a visible sign that the body needs rest. But there are also people who have shadowy eyes without stress or lack of sleep.

The impression of shadows under the eyes can arise in different ways: Often the area under the eyes is slightly sunken. Or the skin color has changed in this area. The tissue below the eyes can also swell more. The lids may be thicker more often. The latter in particular can be a sign of illness and should definitely be clarified.

How it comes to dark circles

The eyes are sometimes marked with rings, especially in the morning after getting up. "This is due to the restricted lymph circulation during sleep," says dermatologist Dr. Ellen Meyer-Rogge. Tissue fluid can collect in the soft area under the eyes. If the fine blood vessels under the delicate skin are temporarily enlarged, they shimmer darker - dark circles appear.

"From a medical point of view, there is no clear explanation why some people tend to have dark circles under the eyes and others not," says the dermatologist with a practice in Karlsruhe. It's not just long nights that bring shadowed eyes. "The skin under the eyes is the thinnest skin on the whole body," explains the expert. As the skin generally becomes thinner as it ages, blood vessels show through more particularly below the eyes. Smoking also increases skin aging.

Sometimes weight loss is responsible for dark circles. If the little fat under the delicate skin shrinks, it also becomes more translucent.

"In some people, the skin around the eyes is particularly heavily pigmented for hereditary reasons and is therefore dark," says Meyer-Rogge. "A noticeable feature of atopic dermatitis is the double crease in the eyelid and overpigmentation of the skin," says the expert.

Dark circles under the eyes: Triggers can be illnesses

The loose tissue between the cheeks and lower eyelids contains numerous fine blood and lymph vessels. A build-up of fluid is therefore particularly easily noticeable here as a swelling. Different diseases - for example of the heart, kidneys, blood vessels, liver - can be the cause. Heart and blood diseases often also affect the oxygen levels of the blood and tissues. Lack of oxygen is also associated with dark circles.

Inflammatory skin diseases with itching promote changes in the area around the eyes. Skin damage caused by scratching is partly responsible. Sometimes there is also swelling. Eyelid swellings are also possible with allergic reactions.

A weakening of the tissue on the lower eyelid due to its structure and age can also result in so-called bags under the eyes. In the process, fatty tissue penetrates and fills the soft skin pockets.

In general, the following applies: New changes occurring near the eyes should be examined by the doctor - bleeding, bruising or swelling should even be clarified immediately.

If you want to prevent the eyes from being surrounded by unsightly shadows, you should go for a healthier lifestyle: no nicotine, little alcohol, regular physical exercise and sleeping in a well-ventilated room, possibly with a raised upper body, are among the recommended measures. This will get the blood circulation going. The body should get enough restful sleep. Quitting smoking helps to improve the structure of the skin. Drinking enough is important so that the skin does not dry out. However, if you have heart or kidney failure, for example, clarify the amount with the doctor in advance.

Cool compresses - placed under the closed eyes for a few minutes - relieve slight swelling and circles in the morning.

Dark circles under the eyes are even more noticeable on pale skin than on a tanned face. However, dermatologist Meyer-Rogge advises against going to the solarium and long sunbathing. "Here the damage is greater than the benefit," says the expert. Because the skin around the eyes is so thin and sensitive, exposure to the sun can lead to premature skin aging. We therefore recommend good, skin-friendly UV light protection and suitable sunglasses for your eyes when you are in the sun.

Aesthetic surgical interventions such as eyelid tightening are often performed against bags under the eyes. Since they are usually not medically necessary, the health insurance usually does not pay.

The sensitive skin of the face should be removed gently and without rubbing before going to bed. Dermatologists and pharmacies can advise you on compatible cleaning and care products.

"A lipid-replenishing eye cream with sufficient moisture nourishes and protects the delicate skin on the eyes," recommends Meyer-Rogge.

With paint and creams against dark shadows

Even if dark circles are often annoying, most of them are harmless. The fastest way to "disappear" under the eyes is when they are skilfully covered with make-up. Make-up artist Sabine Eriksson advises: "First apply a liquid concealer, i.e. a covering product, to the lower eye area, then apply the make-up and then work in a liquid concealer again." Liquid concealer has the advantage that it does not settle in the skin wrinkles. You should also make sure that it is two shades lighter than the make-up used. "Light areas of skin are visually receding and are less noticeable," explains the make-up expert.

The make-up artist also has a tip for people who wear glasses: "You should avoid bluish tinted glasses for dark circles." Dark circles are also emphasized by the shade of blue in the lens. If a tint is desired, a light orange tint is best: Orange brightens and neutralizes the gray shadows under the eyes.

Pigment rings can be counteracted, for example, with lightening creams. "However, this overpigmentation does not go away completely," says Meyer-Rogge. 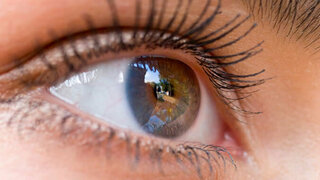 A thickened eyelid can be painful, itchy and sometimes even dangerous. Often it is cosmetically annoying, sometimes ...