The election for the 17th Legislative Assembly of Uttar Pradesh took place from February 11 to March 8, 2017 in seven phases. The turnout in this election was 61.04% compared to 59.40% in the previous election. The Bharatiya Janata Party (BJP) won the election with an overwhelming three-quarters majority of 325 seats, despite not presenting a prime minister before the election. As part of its electoral strategy, BJP ran under collective leadership and mainly used the political influence and “brand” of its leader Narendra Modi. In the previous elections in 2012, the Samajwadi Party had won a majority and formed a government led by Akhilesh Yadav.

The electoral process is changing

In January 2016, the Indian Electoral Commission released updated electoral rolls in all 403 assembly segments. In July 2016, the Election Commission decided to increase the number of polling stations in Uttar Pradesh for the 2017 assembly elections. In the constituencies with more than 1,500 registered voters, new polling stations and polling stations in six constituencies of Muzaffarnagar, Budhana, Purkazi, Khatoli, Charthawal and Midanpur are planned, which are to be increased from 1,769 to 1,819 voting booths. Voter support booths would be set up and photo slip of voters in a new design would be sent to them. For the first time, Form 2B would include the candidate's photo and nationality.

According to the special summary revision of the electoral roll, there were a total of 14.05 crore voters in Uttar Pradesh in January 2015. 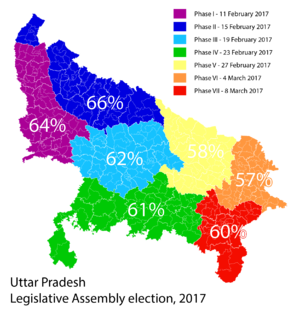 Election plan with voter participation in each phase

The parliamentary elections in Uttar Pradesh took place between February 11th and March 8th 2017. The outgoing government's term of office ended on May 27, 2017.

On January 4, 2017, the Indian Electoral Commission of the Uttar Pradesh Legislative Assembly, along with the other four states (Goa, Manipur, Punjab and Uttarakhand) that are eligible for election, announced the election plan. The entire election is divided into 7 phases.

The election results for all 403 legislative assembly seats were announced on March 11, 2017.