What do you mean by demonization

Review: "Do you think the Russians want war?" 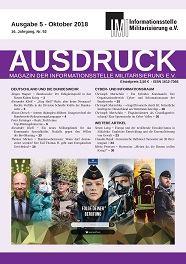 Jörg Kronauer, sociologist and freelance journalist, with his book “Do you think the Russians want war? Russia, the West and the Second Cold War "certainly did not open up a completely new topic. [1] But in view of the developments in Russian-Western relations, the way Germany and the USA deal with Moscow remains a topical issue, about which everything has still not been said and written. New incidents also mean that there is a constant need for discussion: Russia's alleged interference in the presidential election campaign of 2016 continues to preoccupy the US public to this day, and the so-called Skripal case has been causing a stir in London and other European capitals since March of this year. [2]

However, it is not so much these current events, but rather the historically grown structures in German-Russian and US-American-Russian relations that are the focus of Kronauer's book. The historical development of these relationships is dealt with in the first two chapters. The third chapter deals with Russian "Western policy" and the fourth and last chapter focuses on the so-called New Cold War. [3] As the title of the book suggests, the author would like to work out the motives behind current Russian foreign policy. He argues conclusively that this also requires an analysis of German and US policy towards Moscow, since the Kremlin's actions are often a reaction to it.

The presentation of the history of German-Russian relations is particularly interesting, as it contains many little-known facts. The historical description depicts a century of changeable connections. It begins after the end of the First World War and ends with the war in Ukraine. Kronauer's analysis of the ambivalence in the attitudes of the various German states (or their governments) towards Russia is particularly apt. In contrast to other books on this subject [4], Kronauer does not focus solely on constructing the enemy image, but also emphasizes economic cooperation: “Bitter internal disputes have shaped German policy towards Russia not only recently. Even the German dealings with the Soviet Union, and even with the Tsarist Empire, have always been shaped by contradicting Poles. On the one hand there was an interest in cooperation, especially in the economy, which was looking for access to Russia's sales market and raw materials. Leading politicians, who - mostly in phases of their own weakness - wanted an ally in disputes with states in the West also sought a certain degree of cooperation. Sometimes even the military sought alliance with Moscow. Conversely, there has always been a policy of sharp confrontation - especially when the German establishment felt powerful enough to assert its interests in the East against Russia or the Soviet Union (p.9-10) confrontational aspects in German policy towards Russia, but there are still a large number of voices in the German debates warning (for economic and political reasons) against a complete break with Moscow.

In the next chapter, Kronauer deals with US-American-Russian relations. This chapter is also a representation of the historical developments from the end of the First World War to the war in Ukraine. With regard to Washington's actions towards Moscow, the author emphasizes the differences compared to the German approach: “The US policy towards Moscow follows completely different premises than the German one. Since the United States rose to become a global power, distant Russia has always been one thing above all else: a potential rival. Of course, US companies have always sought the opportunity to do profitable business with Russia. However, these have never achieved the outstanding importance that they had for German companies. In return, Washington has always tried to fight the influence of its Russian and Soviet rivals and to weaken Moscow itself (pp. 81-82). ”With reference to the political scientist and founder of the think tank“ Stratfor ”, George Friedman, Kronauer adds that a central endeavor of US policy will always be the prevention of a German-Russian alliance. Such an alliance would have considerable effects on the dominant role of the USA in the global geopolitical structure.

Russia: from cooperation to confrontation

The third chapter of the book then focuses on Russian foreign policy. The author describes the development of Russian-Western relations after the end of the Cold War, although this section offers less innovative analyzes than the previous parts of the book. Kronauer emphasizes that Moscow tried for a long time to build a profitable relationship with the West through economic and political cooperation, but was forced to give up this line. The strategy of improving the foreign policy constellation, especially through close German-Russian economic relations, failed: “The 'Strategic Partnership' that Berlin had proclaimed in 2000 was only on paper in this regard. And all the paper confessions could not prevent the Federal Republic from reaching out more and more to the most immediate Russian area of ​​interest in Eastern Europe: From the mid-2000s, Ukraine, Belarus, Moldova and the three became closer to the EU in Berlin and Brussels States of the South Caucasus put on the agenda. It was clear that the Eastern Partnership, as the project was officially called from 2009 onwards, would not only strengthen the German influence, but also weaken the ties of the named countries to Russia and thus clearly be at the expense of Moscow (p.133). " As a result of the failure of the cooperative approach, Moscow then switched to a more aggressive foreign policy, which was intended to clearly show the NATO states the limits. Since the war in Georgia in 2008 in particular, Russian-Western relations have continued to deteriorate. This development reached its peak for the time being in the Ukrainian war in 2014.

Kronauer uses the term of the New Cold War (or "second Cold War", as in the title of the book) for the time since the coup in Ukraine, which he considers in the fourth chapter. While US policy towards Russia now has an exclusively confrontational character, after the end of the largest disputes in Ukraine, according to Kronauer, there is now, as has been the case more often in history, a mixture of cooperative and confrontational political elements ("congagement") to observe - "cooperative, where economic interests want to be served, confrontational, where there is a question of power" (p.166). In addition to parts of the SPD, the head of the Munich Security Conference, Wolfgang Ischinger, can be seen as one of the central proponents of this type of policy.

It is revealing how the author describes Russian politics in recent years. Contrary to what is often claimed, the hybrid warfare often attributed to the Kremlin - especially the use of media disinformation campaigns and cooperation with (partly right-wing extremist) opposition movements in other countries - is by no means a Russian invention. Rather, it is a reflection of Western methods in the post-Soviet space. A way out of the escalation spiral "would only offer a common disarmament, and not only on a military, but also on a political level" (p. 201), so the final argument of the book.

Overall, Jörg Kronauer has succeeded in writing an easy-to-read book that adds important new aspects to a topic that has already been dealt with a lot. With regard to German-Russian relations in particular, he presents many valuable, lesser-known facts. The analysis of Russian foreign policy is less innovative, but gives a good overview of events since the end of the Cold War. In a few sections there is a lack of a more critical look at Russian politics, e.g. in relation to Moscow's war on terror or the military operation in Syria. Nonetheless, the deconstruction of the Western criticism of Russia, as it is carried out by the author, is justified in every respect. Reading the book is recommended.

Brief information about the book:

The title of the book is derived from a poem by the Soviet author Yevgeny Yevtushenko from 1961. Yevtushenko referred to the great losses of the Soviet Union in World War II and doubted that the USSR would risk another war in the system confrontation of that time. According to Jörg Kronauer, the author tried to “mentally disarm” (p.7).

[2] The journalist Brendan O'Neill commented on the reactions to the poison attack on the former Russian intelligence officer Sergej Skripal and his daughter in the English city of Salisbury as follows: "The chauvinistic fear of Russia is out of control" (cf. O'Neill, Brendan : The Jingoistic Fear of Russia is out of control, spiked.com, 13.03.2018). Some aspects of the Skripal case that have been neglected to this day can be found in this article: Murray, Craig: Russia under Indictment: The Novitschok Mystery, in: Sheets for German and international politics, Vol. 63, No. 4, 2018, pp. 53-57.

[3] For critical comments on the use of this term, see: Westad, Odd Arne: Has a New Cold War Really Begun? Why the Term Shouldn't Apply to Today’s Great-Power Tensions, foreignaffairs.com, March 27, 2018.