It is necessary to build huge churches 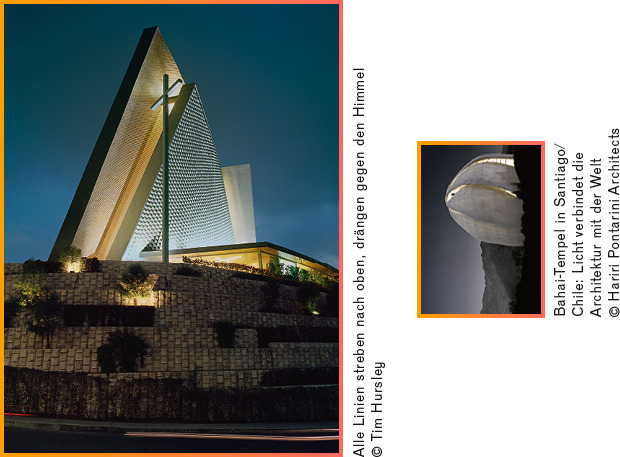 In every culture, sacred buildings are among the most demanding tasks in architecture. The combination of aesthetics and spirituality makes them buildings of social relevance. Churches are also faith turned to stone, places of hope and consolation that cannot be grasped by words. In the past they were also places of refuge in a physical sense.

Even today, churches are topoi of the incomprehensible, even the smallest and most inconspicuous become special places on church holidays, where crowds (however large) gather. Something vibrates in them, the influence of which even the greatest agnostics can hardly escape. Is it the awe of the towers rising to the sky, of this expression of power? Is it the respect for all the gold and precious objects that have been accumulated and displayed over the centuries? Is it the silence that silences people and makes them reflect? Is it the seclusion of the church rooms, the possibility to distance oneself from the material world - the meditation?
Designing a church today does not only mean taking into account the aesthetic aspect and the obviously religious symbolism such as the church tower, but also approaching the mystical content of the respective religion. A church must also consider the feelings and needs of the people who will use it. It should be a living, vital message of the liturgy and it should also convey a feeling of security.

TODAY'S CHURCHES
In Mexico City, the Mexican architect Javier Sordo Madaleno Bringas designed a church which, in its external as well as internal appearance, reveals a transparency, a figuratively spoken striving upwards. It is probably no coincidence that here, as in Heinz Tesar's church near Vienna's Uno-City, the wood in the interior creates a certain sense of well-being. In contrast to Mexico, where a claim to power is noticeable due to the form rising towards heaven, the Church of Tesar seeks - almost figuratively speaking - the closeness of people. It is “small” compared to the mighty skyscrapers on the Donauplatte in the background, but it is a building with character that also exudes the necessary appropriateness. Architect Tesar sees it in a time and space-related context: “It is contemporary because of the material in its environment, not intrusive on the outside. It arouses curiosity from the outside. You can see into it from the outside because it has windows down to the floor and works not with one but with a multitude of lights, and because it differentiates between the different lights, because it is not cold inside, but the light wood is a pleasant one Creates atmosphere. Because she doesn't play with the absolute contrast between outside and inside. She gives a wide variety of people different answers. "
At the church in Podersdorf in Burgenland, owned by Lichtblau.Wagner Architects from Vienna, the “being open” and “giving answers” ​​mentioned by Tesar come to fruition in a modern, almost psychological way: the glass surface that characterizes its appearance was initially with one Provided a kind of veil, indefinite, simply a pane that held two structures together. For a later point in time, it was to become the area of ​​appropriation for the community through which it could define itself. The result was a text image with grassroots, problem-related statements in gold. Gold has a signal effect: it can only be a church! Of course also in an ironic sense, because gold is the sovereign color of power.

CHURCH BUILDING IN OTHER RELIGIONS
Different countries, different customs - the approximately five to eight million followers of the Baha'i religion, which is widespread worldwide, now live mainly in India, Africa, North and South America. The universal religion, which originally emerged from the Persian Babism, has at its center the belief in a transcendent God, the mystical unity of religions and in the unity of humanity. For them, light is the fundamental connecting force of the universe.
The Bahai Temple in Santiago / Chile was designed by Hariri Pontarini Architects. He uses a translucent stone and the latest glass technology to unite and make visible both a physical and a spiritual glow in architecture.
During the day, the gently undulating alabaster skin and the glass determine the external impression. At night, the image is turned around - the entire volume radiates a warm, gentle glow, and the inner workings can be seen through the glass.
Unlike Christian churches, mosques are not houses of worship, but multifunctional meeting places without a uniform canon of forms. Only indispensable element
for the believers the prayer wall, which is exactly aligned to Mecca, is the qibla with the prayer niche (mihrab). Through common prayer, sacredness arises. As a place of prayer, learning and teaching, the Iron Mosque in Putrajaya, Malaysia, combines tradition-conscious religiosity with contemporary identity. Independent in terms of form and functional aesthetics, it is already considered a masterpiece between nostalgia and modernity.

THE FUTURE OF CHURCHES
In our latitudes, existing churches are increasingly becoming ballast, rededicated and changed for secular uses. Or passed on to other religious communities that apparently have even more financial resources. In Vienna, the Neulerchenfeld church is to be sold to the Serbian Orthodox religious community. The New Apostolic Church of Southern Germany has sold sixty churches and chapels since 2001.
The architect and Jesuit priest Gernot Wisser SJ, who studied architecture in Vienna, sees the problem more as an urban one: “A church is a 'local supplier', just like there are others. She provides people with spiritual things so that their lives can be more successful. The fact that churches are then empty in inner-city areas is a completely normal urban development problem. Of course, on the one hand I am sorry if the church is no longer used because there are no longer enough believers and there is no longer any need - but that's just how life goes. "

ART AND CHURCH ROOM
An important part of the sacred, the church interior and the church building, was and is always art. In antiquity it was supposed to serve for the joy and exaltation of the gods, in the Roman Catholic Church it was "essentially directed towards the infinite beauty of God" (2nd Vatican Council).
When I asked Father Gustav Schörghofer SJ, artistic pastor of the Vienna Jesuits, about the connection between contemporary art and the church today, he said: “Christianity no longer knows the separation between sacred and profane. The pivotal point is the word 'beauty', also in the utterances of the Popes. That probably comes from theological thinking. But it can be - as it is in the documents - on the
Not really applying contemporary art. In the 20th century, a completely new concept of beauty emerged. One has learned to discover beauty in the inconspicuous as well as in the ugly things. And it is a task of the church to mediate between the artists, the works and the viewer - in the space of the church. "
"Beauty is in the eye of the beholder," said the little prince of Saint-Exupéry, which means that the role of the sighted turns out to be an active and decisive one.
Most architects are not necessarily denominational believers with a living connection to a parish. But that does not mean that they have no access to the spiritual-mystical, to the spiritual realm. Le Corbusier, for example - who was asked at the inauguration whether he was religious at all - replied: "Some things are sacred, some are not."

Humility and restraint
The images and ideas of old churches and cathedrals are anchored in people like archetypes in the consciousness: the high room, the arches of the architecture, plastered white walls, stone blocks, columns, simply traces of time and use. Regardless of whether it is a Gothic or Baroque building with splendor and gold or a simple Romanesque chapel: something vibrates in these rooms that leads to transcendence.
Church building by modern architects is probably a question of format. In this sense, the Church is well advised not to go to the vanity fair and the competition of images. Modesty, restraint and humility are values ​​nowadays that are still worthwhile - without having a moralizing effect. Wanting too much always leads to a loss of grip and, for those who think they are at the top, a loss of control over (their own) reality.
All over the world churches are destroyed and plundered every day, shrines of various religions devastated - the world looks the other way.
But to believe means to take a stand, to act. Believing does not mean leaving it to others and nodding benevolently to a collection of truths; believing means giving space to this content. A room of refuge, of security, a room to talk to God. It is for this very reason that we need churches and that is why churches are still being built today.