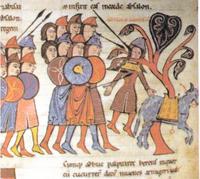 The Hebrew form of the name אַבְשָׁלוֹם (’Avšālôm) means "The Father (sc. God) is salvation / integrity" or "(The God) šālôm is father ”.

Absalom was after 2Sam 3,3; 1 Chr 3,2 the third son → David. His mother → Maacha was the daughter of Talmais, the king of → Geschur, an Aramaic principality east of the Sea of ​​Galilee.

2.1. Absalom in the story of the succession to the throne

Stories about Absalom can be found in the so-called → history of the succession to the throne. After 2Sam 13, Absalom's sister → Tamar is raped by her half-brother → Amnon. David gets angry about what happened, but otherwise remains passive and does nothing to harm his son. In contrast, Absalom, in whose house the violated Tamar lives, seeks revenge. Two years after the crime, he has Amnon killed at a party and then flees to his maternal grandfather in Geschur. He spends three years there.

Using a trick, Joab, who realizes that David is inclined to his son, succeeds in bringing Absalom back (2 Sam 14). He sends a woman from → Tekoa to David, who presents him with a bogus legal case according to which her only remaining son is to be killed by the clan because he killed his brother. When David promises to stand up for her cause, she transfers the case to the exiled Absalom, whose banishment she compares to the untimely death of a person. Through this intervention, David can be moved to allow Absalom to return to Jerusalem. However, he is not allowed to appear before the king for two years. It was only when Absalom put massive pressure on Joab (he had his fields set on fire) that Joab campaigned for him to be admitted to court and rehabilitated.

In the context of 2Sam 14 there is a note about Absalom's external form. In 2Sam 14.25 his beauty is emphasized, in v26 (which is probably a subsequent addition) the abundance of his head hair, which was considered a special sign of manhood. According to 2 Sam 14:27 he had three sons and a daughter, whose name Tamar (name identical to Absalom's sister) is specially emphasized. In contrast, 2Sam 18:18 states that Absalom had no sons and therefore had a → mazzebe (a memorial stone) erected - the comment is likely to be a later addition (Conroy 1978; Stolz 1981).

In 2Sam 15-18 there is an account of Absalom's revolt against his father and his suppression. The narrative begins in 2Sam 15 with the statement that the king's son has given himself a bodyguard consisting of chariots and foot troops. This is a parallel to Adonija's behavior in 1 Kings 1,5, which is branded there as arrogant. In addition, Absalom encroaches on the judicial competence of the king by trying to convince those who seek this right that they will not be heard by him. After four years the uprising breaks out. David has to flee from Jerusalem, but orders that the priests → Zadok and → Abjatar and their sons stay behind as informants in the city, as does his friend → Hushai, who is supposed to intrigue against Absalom's counselor → Ahitofel.

In 2Sam 16 David's flight to the Jordan and Absalom's entry into Jerusalem are described. The focus of the presentation is now on the advisors Ahitofel and Huschai, David's secret ally, whose expressions of loyalty Absalom believes. After a presumably secondary insertion in 2Sam 16: 21-22. (Würthwein 1974; Werner 1988), on the advice of Ahitofel, Absalom takes over the harem of the concubines that David left behind in Jerusalem, demonstrating his claim to his successor and bringing about the final break with his father. If Ahitofel rightly advises in 2Sam 17 that David should be persecuted immediately, Hushai can convince the rebels in a verbose, artfully designed speech that it is better to first pull together the army of Israel and then use united forces to overcome David. This offers the expelled king the opportunity to regroup his troops.

2Sam 18 describes the battle against the insurgents. It is emphasized that David, who does not take part in the fight, expressly requests to be gentle with his son. The rebel army is defeated. Absalom, who has got his head caught in the branches of a → terebinth, is killed by Joab. When David, who fears above all for the life of his son, receives the news of his death, he falls into immeasurable grief (2 Sam 19). This earns him the accusation of Joab that he was shaming the army that worked to save him. He then shows himself to the troops to honor the victors.

As far as the question of historicity is concerned, it should be noted that not only those events limited to the family area (2Sam 13), but also those events relevant to state politics are presented in a strongly stylized form. For example, the presentation of the events in 2 Sam 16: 15-17, 23 aims to contrast the two counselors Ahitofel and Hushai (cf. Hushai's detailed speech in 2 Sam 17: 5-14). The description of the confrontation with the rebels focuses on the fate of Absalom and David's reaction to the death of his son. It is conceivable that the problems of a legal nature indicated in 2Sam 15, which lead many followers to Absalom, are related to the upheavals that had resulted from the establishment and consolidation of kingship.

Already in 2Sam 13 an ambivalent picture of Absalom becomes recognizable. On the one hand he is portrayed as the one who - unlike David - clearly takes Tamar's side, on the other hand he is in no way inferior to Amnon's murder in his cunning approach and cold-bloodedness. That he wanted to eliminate an unpleasant competitor in view of the succession to the throne with Amnon, as is assumed by some, does not emerge from the story. In order to achieve his goal of being fully rehabilitated, he resorted to violent measures according to 2Sam 14:30 (see above); he is portrayed here as purposefully as he is inconsiderate. The same applies to the planned preparation for the uprising, which extends over four years (cf. 2 Sam 13:23; 2 Sam 13:32). His behavior is commented on by the narrator as saying that he "stole" the hearts of the Israelites (2 Sam 15: 5). His underhandedness is clearly emphasized here.

According to the story of the succession to the throne, however, he himself fell victim to a deception when he believed Hushai, David's confidante, which ultimately led to his downfall. In the context of the narrative of the Absalom uprising, one of the rare theological interpretations of the history of the succession to the throne comes across in 2Sam 17,14b (cf. 2Sam 11,27b; 2Sam 12,24b *), in which it is stated that YHWH himself had caused the rejection of Ahitofel's council, to bring calamity to Absalom. This passage or the entire section 2Sam 17.5-14 is seen by some as a secondary insertion (Würthwein 1974; Langlamet 1976).

In contrast, 2Sam 18 emphasizes David's concern for Absalom. His desperation at the news of his death is impressively portrayed (2 Sam 19: 1). His love (2Sam 14,1), but also his indulgence and weakness (2Sam 13,21) towards Absalom shape the image of the relationship with his son.

All versions of this article from October 2017 can be downloaded as a PDF archive: