What does internet user mean

Internet usage in Germany: These are the reasons behind the offline

84 percent of all Germans use the Internet these days. But what about the other 16 percent who are still offline? Who are these 10 million people and what are their reasons for not using the internet? And how can you manage to get them excited about the Internet in the future? In this blog article we take a look at the latest findings of the D21 Digital Index 2018/2019 of the D21 initiative, which creates an annual situation report on the digital society.

Internet use by Germans

No matter where you walk or stand: Many people seem to have grown together with their smartphone. Whether on public transport, while running, in a restaurant, in bed and, unfortunately, far too often behind the wheel - our smartphone is always a maximum of an arm's length away. A Statista study from 2018 shows: 41 percent of all respondents look at their phone within the first 15 minutes after waking up, almost as many look at it within the last 15 minutes before going to bed.

But is it really the case that everyone is online all the time these days? What about Germans using the Internet? Let's take a quick look at the statistics.

4 billion people around the world use the Internet. That means over half of all people in the world are already online. In Germany, too, the number of Internet users is rising steadily: in 2018, 84 percent of all Germans were online. One of the most important reasons for the growth is mobile Internet use via smartphones, tablets and the like - it has increased by 14 percent since 2015 and is likely to continue to increase in the years to come.

A look at the figures, however, reveals another exciting aspect, on which the focus is otherwise rarely directed: There are still around 10 million people in Germany who do not use the Internet. 16 percent of all Germans are still offline, as the D21 Index 2018/2019 shows.

But who are these people and what prevents them from not using the Internet? In this blog article we want to take a closer look at these 10 million offline people and their reasons and motivation.

The fact is: not using the internet is an aging phenomenon. Because almost all people under 40 are online. However, if you take a look at older age groups, usage continues to decline. In the age group of 60 to 69 year olds, 21 percent do not use the Internet at all and among those over 70 years old, not even half (45 percent) are online. As the D21 report shows, three quarters of the offline are older than 65 years, and a larger proportion of them are female (64%).

Reasons not to use the internet

But what are the reasons for not using the Internet? After all, you can hardly ignore the Internet these days. The D21 study also examined this and asked the off-liners more precisely.

The most important reason is quickly found: More than eight out of ten off-liners stated that they were simply not interested in the Internet. Interestingly, this is a little more common for men than for women. The reasons “is too complicated for me” (37 percent) and “do not see any benefit for me” (34 percent) then follow at a great distance. For a little more than a quarter of those offline, the traditional media are also sufficient, while one in five stated that children, acquaintances or friends do everything they need on the Internet.

Security and privacy concerns also play a role, but make up a small part of the reasons against the Internet.

A lack of interest and the complexity of the digital world are currently preventing most of the offline people from venturing into the Internet. 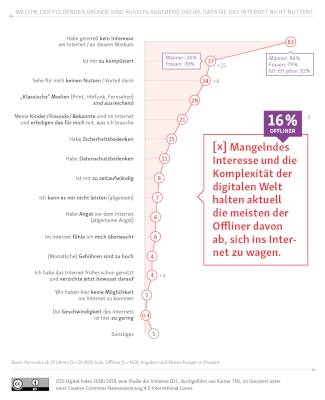 How can you get offline people interested in the Internet?

At least as important as the search for the reasons for abstinence from the Internet is the question of how to convince offline people to use the Internet in the future.

The fact is: Almost a fifth of all offline users only discover the benefits of the Internet when they do Application to a specific case see. Because many people who do not use the Internet are not even aware of the wide range of possible applications and the possible benefits that come with it. One solution is to show you practical use cases of how the Internet can help you in everyday life.

It is also important Fear of contact with technology to dismantle. Twelve percent of respondents said they would like someone to show them exactly how the Internet works, while 11 percent say they would use the Internet if it was easier to use. Some also confuse the technical terms and functions (9 percent). One solution here would be, for example, computer courses for senior citizens or other corresponding offers, e.g. B. in old people's homes and other facilities.

Only five percent would like information on how they would like theirs Protect data better can - although this is only a small part, this reason is still one of the top 5 motivators for use. Again, this could be counteracted with appropriate educational offers and ways to data protection can be conveyed.

Conclusion: access to the Internet is becoming more and more important

Even if internet usage continues to rise in Germany, we should not forget those people who cannot easily access the internet. Because the more the Internet penetrates our society, the more important it is to be “online” for participation in our society. That is why studies such as the D21 Digital Index are important, which look for reasons and show concrete solutions. So that in the future nobody has to be unintentionally offline and can use the Internet actively and in an informed manner.

Fit on the net 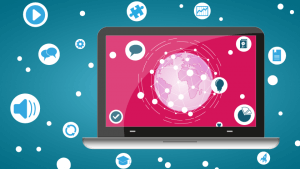 Do you know someone who could use some internet tutoring? Or maybe you are still often unsure yourself and could use some initial help with matters relating to the Internet? Then just take a look at our “Fit on the Net” course. And the name says it all for this course: After you have completed the course, you will be really fit around the subject of the Internet and terms such as wikis, Web 2.0 and copyright are guaranteed not to worry you anymore.

Here is a brief look at the topics that await you in the online course:

For only 50 € you have access to the course for six months. By the way, “Fit on the Net” is also the perfect gift for grandma, grandpa, aunt, uncle or the nice neighbor who also likes to finally share with their grandchildren this internet want to chat.

Maybe also exciting for you ...

The digital society: An overview of all important terms in digitization

Why we love barcamps and why you should go to a barcamp too!

Political interest vs. political disenchantment in Germany - a fact check