What happened to the Tasmanian devil

New hope for the Tasmanian Devil

It is highly contagious and inevitably leads to death: the Tasmanian devil's facial cancer is spreading more and more, but so far there is no cure. Now there is new hope for the last great predators on earth. An international team of researchers has discovered why the devil's immune system does not recognize the cancer cells - and also how this can be remedied. On the basis of their findings, a vaccination could be developed that could protect the endangered species from cancer, as they report in the journal “Proceedings of the National Academy of Sciences”.

There are only two types of cancer in the world that can be transmitted from one animal to another through direct contact. One of these is a canine tumor, the other is devil facial tumor disease (DFTD). It originated 16 years ago through a mutation and has since spread almost unchecked among the predatory baggers in Tasmania. The roughly dog-sized animals infect each other when they bite and transfer tumor cells to their counterparts.

Invisible to the immune system

"The immune system should actually recognize and destroy the cancer cells as foreign and as pathogens," explain Hanna Siddle from the University of Cambridge and her colleagues. But this is precisely what is not the case with DFTD. Instead, there is neither a rejection of the foreign cells nor any other targeted immune reaction. But why? To clarify this, the scientists began their search for a specific protein complex that almost all cells have on their surface: the so-called MHC complex 1. It is a kind of identification tag that tells the body whether it is with its own or other cells has to do.

The researchers developed a labeled antibody that specifically binds to this complex and tested its reaction to cells of the devil cancer DFTD. They found that the tumor cells completely lacked this MHC complex. "That explains why the foreign cancer cells are not recognized by the immune system," say Siddle and her colleagues. Because without this marker, they are practically invisible to the defense. 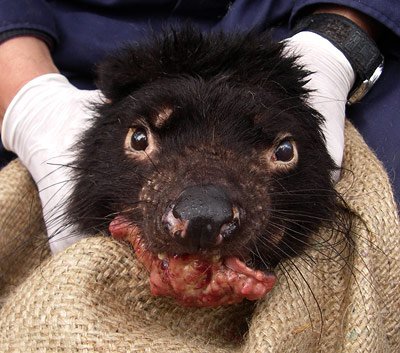 A marsupial devil suffering from DFTD with a clearly recognizable tumor on its mouth. © Rodrigue Hamende

But what is the reason for the missing “foreign” label on the DFTD cells? It would be obvious to assume that the building instructions for these proteins contained in the genes mutate in the tumor tissue and are therefore no longer functional. But when the researchers checked this, they did not find any mutations in the corresponding DNA sections. “They are completely intact and can produce functional MHC molecules,” they report. But they found what they were looking for when they tested the extent to which these intact genes are read by the cell machinery. As it turned out, deposits on the genome and on the packaging of the chromosomes blocked reading and made the tumor cells free of labels.

This is good news for the endangered Tasmanian devil. In contrast to mutations, such epigenetic changes are reversible - they can be reversed by certain enzymes and immune messenger substances. Siddle and her colleagues have already successfully tried out that this also works with DFTD cancer: if they culture tumor cells with the messenger substance interfron gamma, they begin to form MHC-1 molecules again on their surface. This made these previously invisible cells recognizable and vulnerable to the immune system as foreign again.

Usable for vaccine against DFTD

“This principle could be used to develop a vaccine against DFTD,” the researchers hope. Their idea: If you treat tumor cells with interferon and then inject them into the Tasmanian devils in a deactivated form, their immune system recognizes them as foreign - and not only remembers the “label” of the MHC complex, but also other telltale proteins on the cell surface. If unmanipulated DFTD cells then get into the bag's body through a bite, the defense has a chance to recognize and fight them despite the lack of an MHC label on these proteins.

The nice thing about it: Once this happens, the immune system produces interferon gamma by itself and thus also forces the newly invaded tumor cells to give themselves away, as the researchers report. Further tests and research are still necessary, but the new findings could open up a possibility for the first time to protect the last great predator on our planet from the ultimate end. (Proceedings of the National Academy of Sciences (PNAS), 2013;