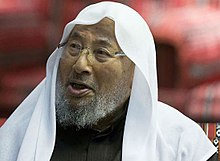 Yusuf al-Qaradawi has a weekly program on al-Jazeera. Image taken in January 2018

In Muslim countries, religious broadcasts are dominated by Salafist Sunnis preachers. But Shiites or Alevis also appear as “televangelists”. One of the most popular Sunni scholars, who has the opportunity to speak almost weekly, is Yusuf al-Qaradawi (al-Jazeera on the Ash Sharia wa al-Haja program). Also very popular is the Egyptian Amr Khaled (not a scholar), who appears on the Islamic channel Iqra of the Arab Radio and Television Network, among others. Other scholars include: 'Umar' Abd al-Kafi and the theology professor Suad Salih. Some scholars' records are also distributed on CD, DVD, or MC.

The Turk Harun Yahya, who is close to the Gülen movement, is not one of the Salafist television preachers. His sometimes bizarre appearances often took place in the company of scantily clad young women he called "kittens" and they had creationist and conspiracy theory content. Since the break between Gülen and the Erdogan government, Yahya no longer appears on Turkish television, but instead spreads his appearances on the Internet.[7][8]

The US presenter Rachel Maddow has created a matrix of television preachers and their offenses.[9] The band Genesis criticized the financial behavior of the television preachers with their song "Jesus He Knows Me" (1991, on the album "We Can't Dance"), as did Iron Maiden with the song "Holy Smoke" (1990 on "No prayer for the dying "). Frank Zappa also addressed this with his songs "Jesus Thinks You're a Jerk", "Dumb All Over" and "Heavenly Bank Account".

The feature films Glory! Glory!, Salvation!, Pass the ammo and Pray TV parody the TV sermon business. The church Our Lady of Perpetual Exemption was a registered church founded by satirist John Oliver to criticize the televised business. The documentary Marjoe exposes the business as charlatanry.

Conservative theologian John MacArthur published a series of articles in 2009 in which he harshly criticized the methods of some television preachers and denounced their greed for profit:

"Someone needs to say this plainly: The faith healers and health-and-wealth preachers who dominate religious television are shameless frauds. Their message is not the true Gospel of Jesus Christ. There is nothing spiritual or miraculous about their on-stage chicanery. It is all a devious ruse designed to take advantage of desperate people. They are not Godly ministers but greedy impostors who corrupt the Word of God for money's sake. They are not real pastors who shepherd the flock of God but hirelings whose only design is to fleece the sheep. Their love of money is glaringly obvious in what they say as well as how they live. They claim to possess great spiritual power, but in reality they are rank materialists and enemies of everything holy.

It has to be said clearly: the faith healers and prosperity preachers who dominate religious television are shameless ripoffs. Your message is not the true gospel of Jesus Christ. There is nothing spiritual or miraculous about their stage shows, but rather underhand trickery to make profit from people's desperation. They are not godly servants, but greedy deceivers who corrupt the word of God out of pure greed for money. They are not real shepherds who tend God's flock, but hirelings whose only motivation is to strip the sheep of the sheep. Their love of money is so evident in what they say and how they live. They claim to have spiritual power, but in reality they are calculating materialists and enemies of all sacred things. "