Why can't we see x-rays

While working with electrical discharge tubes, Wilhelm Conrad Röntgen discovered invisible rays that can penetrate matter that is impermeable to visible light. In late 1895 he announced his discovery of X-rays known, which are now also known as X-rays in his honor. We can investigate the origin and some properties of these rays in the following experiment:

Attempt: In this X-ray tube, we use a tungsten coil as the cathode, to which a heating voltage is applied. After closing the first switch, electrons emerge from the cathode as a result of the glow emission. After closing the second switch, a high voltage (from 20 kV) is built up between the anode A and the cathode K. The emitted electrons are accelerated from the cathode to the anode. A Wehnelt cylinder around the cathode concentrates the electron beam on the anode. An X-ray tube is always under a high vacuum, i. H. a very low pressure. In front of the tube (opposite the anode) a screen with a fluorescent coating, e.g. B. made of zinc sulfide.

What is happening in this experiment?

After the electrons hit the anode, invisible rays are created that make the glass wall and the fluorescent screen glow.
If we put a cardboard envelope in the beam path, the beams will pass through unhindered, so the screen will continue to fluoresce.
If an iron key comes into the envelope, its silhouette appears on the screen. The key absorbs the X-rays and therefore appears as a dark shadow. The rest of the screen fluoresces again.
If we use a photo plate instead of the fluorescent screen, it is completely blackened outside the shadow of the key. In this way we get what is known as the "X-ray image" of the key.

Now we can summarize:

X-rays are always produced when fast electrons are slowed down by an obstacle, in particular by metallic electrodes. They penetrate matter, whereby thinner bodies and lighter substances let the rays through better. They are strongly absorbed by many metals. They can create fluorescence and blacken photographic film.

Their different ability to penetrate chemically different substances is used for medical diagnosis and non-destructive testing of materials.

We can explain the origin of X-rays with the wave theory: The electrons are slowed down against an obstacle. An acceleration or a deceleration of charged particles always leads to the emission of electromagnetic waves.

Each curve starts at a certain cut-off wavelength. Lower wavelengths do not occur.

So far, only the photon hypothesis can answer these questions:
The generation of X-rays is the reverse of the photo effect. With the photo effect, photons hit a material and release electrons. In an X-ray tube, electrons hit an obstacle and generate the photons of the X-ray radiation.

Before it hits the anode, an electron passes through an acceleration voltage U. Its kinetic energy is therefore:


In the event of an impact, part of this energy is converted when the anode is heated. In addition, the decelerated electrons can emit their energy in whole or in part as electromagnetic radiation in the form of photons. These photons can therefore have at most the energy according to the formula (5.1):

Max firmly. The anode material does not matter. To the highest frequency

min : the cutoff wavelength in the spectrum. We solve the equation (5.2)

The photon hypothesis explains the creation of a short-wave limit in the X-ray spectrum, which only depends on the voltage between the electrodes, but not on the anode material.
With the assumption: The kinetic energy of the electrons becomes the photon energy on impact

converted, we find: The cutoff wavelength

min is inversely proportional to the acceleration voltage U:

This relationship has been confirmed by numerous measurements, e.g. B. with the idea of Max Laue: Since X-rays are generated with voltages in the 10 kV range, their wavelengths are below 1 nm. This value results for the cutoff wavelength with (5.4), and the entire wavelength range is not significantly far from it. Interestingly, the distances between the atoms in solids are also less than 1 nm. From optics we know: If the wavelength of the light is of the same order of magnitude as the width of a gap, diffraction and interference phenomena occur. A system of many such equidistant columns is called an optical grating.

Analogous to the diffraction of light on optical grids, solids with regularly arranged atoms, i.e. crystals, can be used as diffraction grids for X-rays. 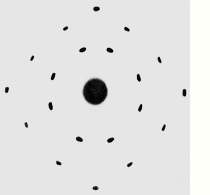 This assumption was tested experimentally in 1912. The interference and diffraction experiments on crystals not only demonstrated the wave properties of X-rays, but also demonstrated the regular arrangement of atoms in crystals. That is why X-rays are used to determine the structure of crystallized substances.
The photo on the left shows us a so-called Laue diagram of lithium fluoride LiF. At the Laue method X-rays are diffracted by a thin crystal layer and emerge in certain directions depending on the arrangement of the atoms. The scattered rays create a regular interference pattern on photographic paper. With this method, the structure of such complex organic compounds as proteins could be determined. It was also used to determine the structure of the hemoglobin molecule, which consists of many thousands of atoms.