Is the growth of the world population underestimated?

The world population continues to grow: According to the latest estimates by UN population researchers, there will be more than eleven billion people on earth by the end of this century. The largest drivers for this growth are the African countries. In Germany and in other industrialized countries, on the other hand, the number of inhabitants will continue to decline and the proportion of older people will continue to increase sharply, according to the forecast.

The number of people on our planet continues to grow: the world population only passed the seven billion mark in 2011, but there is no end in sight to growth - at least in many developing countries. This is also borne out by the latest estimates that John Wilmoth, head of the UN population department, presented at a statistician conference in Seattle.

According to this, the world population is expected to increase from 7.3 billion people today to 9.7 billion in 2050. According to the researcher, this increased again to around eleven billion by 2100. The probability that human growth will stop or even reverse is only a little more than 20 percent.

Africa is growing the fastest

The driving force behind population growth is, of all things, the poorest countries in Africa. On this continent alone, the number of people is likely to quadruple by 2100, according to forecasts. In Nigeria alone, the most populous country in Africa, the persistently high reproductive rate could ensure that the population will rise from 182 million today to 752 million in 2100. 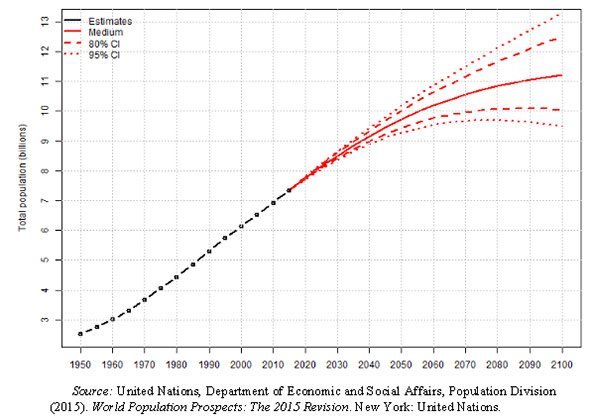 For the affected countries - but also the rest of the world - this is more than just a numbers game, as Wilmoth emphasizes. Rapid population growth in poor countries helps to exacerbate the problems. Resources are becoming increasingly scarce, there is a lack of health and educational facilities, as well as jobs and infrastructure for the growing population. In Africa, too, the reproductive rate is falling in some regions, but too slowly to slow down the rapid population growth sufficiently.

Asia is getting older

Despite this development, Asia will remain the most populous continent: According to UN forecasts, the number of people there will rise to 5.3 billion by 2050, but then gradually decrease to 4.9 billion by the end of the century.

However, by then, Asia will also feel the effects of demographic change. Because emerging countries like China and India still have a rather young population. But as a result of the one-child policy and other population control measures, the average age will increase significantly in these countries as well, as in ours. “These countries must therefore invest some of the gains from their current demographics in the future care of an aging population,” said Wilmoth.

Germany will be one of the oldest

The UN report also confirms that societies in industrialized countries are getting older. The ratio of young and middle-aged residents between 20 and 64 years of age compared to 65-year-olds and even older is shifting more and more towards senior citizens. At present, this rate of those still able to work versus pensioners is lowest in Japan at 2.1, followed by Italy at 2.6.

According to UN forecasts, Germany is one of the countries that will experience a particularly pronounced aging of their society by the end of this century: Here there will be only 1.4 people of working age for every pensioner. China and Mexico will also have reached the same level by 2100. In contrast, the African countries Niger, Somalia, Nigeria, Gambia and Angola still have a value of five younger for every pensioner in 2100.