Precipitation does not have to fall from the sky. Our air always contains some water. Sometimes it is so much that it forms the gray fog. But it doesn't matter whether you see the water in the air or not: it can condense on something, i.e. stick. When it is warm enough, it collects in small drops as dew. When it is cold, the water forms frost or hoar frost on meadows and plants. Cars, or at least their windows, then sometimes become fogged up with a layer of ice.

How much precipitation there is in an area varies greatly. When it comes to the precipitation that usually falls, we speak of the climate. In the tropics, i.e. in the climatic area around the equator, it can often be hot and humid. In deserts, on the other hand, there is very little rainfall.

The weather is somewhat similar, but one speaks of the weather if one only thinks of a day or a few weeks. It then depends on how much it rains or snows during this time. This can be very different from the long-term mean, the average.

What is hail or sleet? 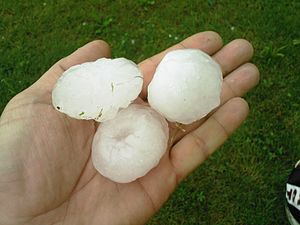 Such large hailstones can break windows or create dents in a car.

Hail is made up of lumps of ice. To be called hail, the grains must be at least five millimeters in size. Hail falls mainly in the warm season.

Hail forms in the lowest layers of clouds. It has to be cold in the cloud. This is quite possible when it is warm below on earth, because it is colder further up. Tiny solid particles are needed for hailstones to develop. Often this is dirt in the air. Water from the cloud freezes around these particles.

The updrafts within the cloud pull the small hailstones upwards. In the process, they grow and become so heavy hailstones that they fall to the earth. This can cause great damage.

Sleet arises from tiny snowflakes. Water freezes all around. These globules are no more than five millimeters in size and then fall to the earth. However, compared to their size, they are less heavy than hail and also less hard. They therefore hardly cause any damage. If sleet is less than a millimeter in size, it is called Griesel.

What are dew, frost and hoarfrost?

In cold temperatures, hoarfrost forms preferentially on branches. It grows like a snowflake. The beautiful structures can be seen with the naked eye.

Dew are droplets of water from the air. When it gets cooler in the morning, the air can no longer store this moisture. That is why droplets are deposited everywhere, on plants, cars, bicycles and everything that is outdoors.

In a very similar way, frost, hoar frost or rough ice develop. For the scientist there are differences, but they are difficult to explain. Simply put, the dew freezes as soon as it has formed. Small needles grow in the process, similar to how a snowflake grows. This creates beautiful structures that can be seen with the naked eye.

How do you measure the amount of precipitation?

To determine how humid or dry an area is, look at the precipitation over an entire year. The easiest way is to set up a transparent tube that is the same thickness everywhere and closed at the bottom. Then you can measure how many millimeters high the water column will be in the course of the year.

There is not the same amount of precipitation in the individual months. In Munich, for example, the most rainfall occurs in May. The least falls in January, March and December. However, the differences are not huge. However, in some countries there is a real rainy season or a dry season.

For "Precipitation" there are also other search results for Blind Cow and Ask Finn.