DW: Ms. Hélie Lucas, you are one of those French intellectuals who signed a text in the newspaper "Liberation" with the title: "With all republican severity against radical Islam". Already in the first lines the undersigned are against the term "Islamophobia". The undersigned complain that the term is used to defame any criticism of Islam. What do you think the term is all about?

The term "Islamophobia" was invented and spread by representatives of the so-called "radical Islam". For that reason alone, it is best not to use it. The reasoning of its inventors boils down to the following: If one criticizes radical Islamists, their worldview, their actions and their crimes, this criticism relates to Islam and not to their positions. From this they then derive the right to self-defense, including the use of force. They declare themselves to be the only legitimate representatives of Islam. All who do not share their opinion are for them "unbelievers" ("kufr") who deserve death. For them, this includes most of the people who live in Muslim countries, i.e. all Muslims who disagree with them, as well as agnostics, atheists or members of other religions. 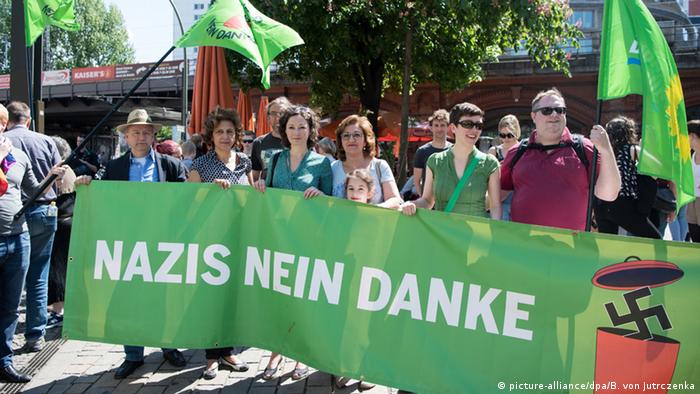 Protect the republic from its enemies. Demonstration against the march of right-wing extremists in Berlin in May 2016

With regard to these groups, you yourself prefer not to speak of representatives of "radical Islam" but of the "extreme Muslim right". Why?

With this term, I emphasize less religion than the political positioning of these groups - which by the way have a lot in common with fascism and National Socialism. For example, they share the conviction that, unlike the Nazis, they may not represent a superior race (the Aryans), but a superior religion (Islam). And as with the Nazis, the alleged superiority is based on a fictional glorious past. By appealing to them, they feel justified and at the same time obliged to physically destroy so-called "subhumans". And like the Nazis, who saw "children, kitchen, church" as appropriate occupation for women, the extreme Muslim right also sees the house and mosque as the appropriate place for women.

Are there connections between the extreme European and Muslim right?

They have a lot in common. Both groups are working towards a confrontation, want to cause a bloodbath to radicalize their members and to recruit more followers.

The extreme right in Europe, which invokes its "white" or "Christian" origins, does not fight Islam as an ideology and a philosophical-religious belief system. It attacks citizens to a far greater extent, whom it defines as "Muslims" because of their origins, without any respect for the principle of freedom of belief and conscience. We cannot downplay the dangers posed by the extreme right any more than its rapid growth.

That is why we must defend all those who are considered "Muslims" by the right. All the more so since they are a minority. We must do this on the basis of human rights. On the other hand, we must not do it by defending Islam as such or even that of the extreme Muslim right.

What is the appropriate response to these two forms of right-wing extremism?

The European left, liberals and humanists, who fail to make this basic conceptual distinction, are doing considerable damage to the progressive and humanist resistance within the Muslim countries themselves. Because ultimately they are defending precisely those who murder the progressive forces there. The fight should therefore be waged on two fronts at the same time: against the extreme Muslim right on the one hand and against the traditional right-wing extremists and racists on the other. In all of this one has to invoke universal human rights.

The signatories of the appeal published in the daily newspaper "Liberation" refer to the republic as the basis of coexistence. What does the Republican Idea stand for?

The extreme Muslim right in Europe is currently pleading for the introduction of its own laws and measures for religious minorities - one thinks, for example, of the "Sharia courts" already in operation in England, which are now also demanding the right-wing Muslims in Canada. In view of this development, it is very important to support the "republic" - the "res publica", as it is called in Latin, the common concern of all citizens. It is important to remember that in a democracy, the laws apply to all citizens without exception. Everyone has the same rights. These rights are not issued by religious representatives in the name of a god. Instead, the citizens are represented by their elected representatives - and not by priests, rabbis, imams or other self-appointed representatives of religious "communities".

How endangered do you think the idea of ​​a republic is?

If one allows different communities to invoke different public orders in a state, this means that not all citizens enjoy the same rights. That contradicts the nature of democracy. For example, a divorced British citizen in a Muslim religious tribunal does not have the same rights as a British woman who goes to a state court with regard to maintenance, care for the children and the division of common property. The same applies to inheritance law: the daughter only receives half of what the brother receives in such a court. And an adopted child is completely excluded from the inheritance. Many examples prove it: if they stand in front of different dishes, they are treated differently.

So the republic is the order that stands up for the rights of the weak?

Yes. It would be pointless to claim that those affected submit to a religious judgment of their own free will. To accept this would mean to fail to recognize the social pressure that weighs on women when the state no longer defends them. The law that applies to all citizens knows only one law that applies to all. So it protects the weakest, those who are least able to assert their rights against the reactionary forces in their "community".

Marieme Hélie Lucas is a sociologist of Algerian origin. She is the founder of the international networks "Women living under Muslim laws" (wluml.org) and "Secularism Is A Women's Issue" (siawi.org).