What is the Stop Brexit Petition

Screenshot of the online petition for a second UK referendum on June 27th at 4pm.

Did the young British wake up too late from hibernation? In the three days following BREXIT, over 3.7 million British people spoke out against the result of the referendum by means of an online petition. Many of them are young. You don't want to suffer the consequences of BREXIT. On Friday, June 24, 2016, 52 percent of the British had spoken out in favor of Britain leaving the EU. Only a third of young Britons (36 percent) took part. For online petitions that reach 100,000 supporters, a debate in the UK Parliament will be “considered”, according to the official petitions website. It is uncertain whether the petition will be debated in parliament - if a topic was only recently the subject of a debate, another debate in parliament can be rejected. The UK has not yet left - the government must first submit an application to the EU.

BREXIT: The opinions of the young and old are very different

72 percent of the British took part in the referendum, the result was very close at 52:48 percent. What is striking about the result is that two thirds of the younger Britons (18-24 years) abstained, while the older Brits in particular decided against the EU. Among those over 65, 58 percent of voters voted against the EU and for BREXIT. Accordingly, the protest against the tight decision comes more from the younger islanders.

Young protest on the Internet: #NotInMyName

The boys in particular are now venting their anger on social networks and on the street. Under the hashtag #NotInMyName (not in my name) young British people emphasize on Twitter that they are not at all satisfied with the BREXIT decision. The number of supporters for the online petition “EU Referendum Rules triggering a 2nd EU Referendum ”campaigning for a second referendum, shot from a few thousand signatures to 3.7 million supporters from Friday to Monday (as of June 27, 2016, 4:00 p.m.). It seems as if the younger generations are now trying to contest the decision of the older ones via online petitions and digital participation. “We young people have to pay for what the old people have decided,” is the tenor. Where in the UK the most votes for a second referendum came from can be seen on this interactive map of the UK Parliament. 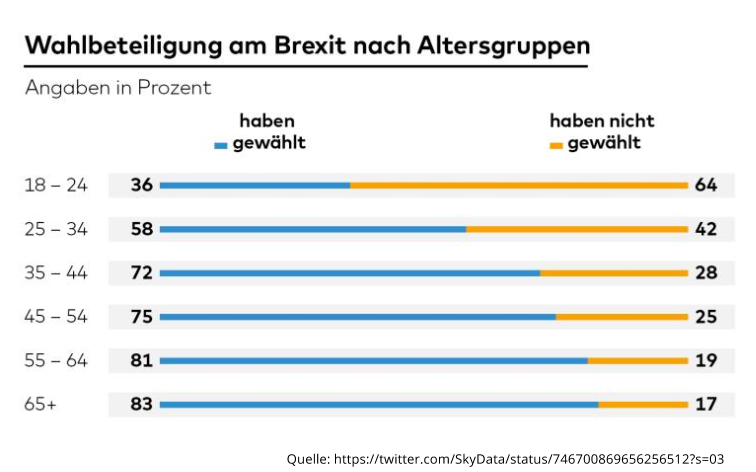 Initiator of the petition: ironically, a BREXIT proponent

The initiator of the petition, Oliver Healey, is a member of the “English Democrats” and ironically a supporter of leaving the EU. He had already started the petition in May 2016 to raise the bar for a referendum in the event that more British people vote in favor of remaining in the EU. Healey demands that one side or the other must achieve at least 60 percent of the votes cast in order to achieve their goal. In addition, a voter turnout of 75 percent or higher must be achieved. He has now distanced himself from the development of his petition via Facebook. In addition to Healey’s petition, new petitions for and against a second referendum have been started in other European countries.

Referendum not legally binding: Brexit is not (yet) set in stone

The referendum showed that just over half of the British want to leave the EU. However, a referendum alone is not enough for an exit. According to Article 50 of the EU Treaty, a written declaration of withdrawal from the UK government is required. Since Prime Minister Cameron has announced his resignation, a government capable of acting is required first to submit an application. So far the British Parliament has not yet commented on the “2nd referendum petition”. So the BREXIT story is not yet 100 percent written.