Which Indian language is closest to Bengali

In the general imagination, India often provides the image of an inextricable mixture of religions, cultures and castes, a society that is torn by social and ostensibly religious conflicts. In addition to this typically Indian diversity - hundreds of castes and thousands of subcases - there is linguistic diversity: in India there are 114 languages ​​that are recognized as such, but by no means all of them have official legal status.

From a linguistic point of view, India is even more differentiated than Europe, and therefore not only inevitably confronted with all aspects of multilingualism, but also with the challenge of protecting the linguistic minorities. Since the overall political and cultural context favors a few large languages ​​- for example Hindi, Bengali, Marathi, Tamil - all of which are recognized as the "state language" in one or more Indian states, many speakers of a smaller language feel threatened by the official language policy discriminated. But against the background of the problems that dominate the public debate on a daily basis, the language question usually goes under or remains in the shadow of religious and caste conflicts. The speakers of smaller languages ​​learn every day that their language enjoys little more than the prestige of any dialect without any cultural or economic value. Obviously, many of these languages ​​are on the decline in most language domains. Various minority languages ​​of India, especially languages ​​of indigenous peoples, have disappeared or are on the verge of extinction in the last few decades. Is this the price India is unquestionably willing to pay for the nation's cultural integration and economic modernization?

Which are actually the "true" minority languages ​​of India, who are the language minorities? 97 percent of today's at least 1.15 billion citizens speak one of the 22 constitutionally recognized (scheduled) Languages. By contrast, around 3 percent speak one of the 92 languages ​​that are registered as languages ​​but have not been officially recognized. Languages ​​spoken by fewer than 10,000 Indians are no longer recorded as languages ​​at all. Constitutional recognition does not mean that a language is actually protected by federal or state law, or that it is recognized as an official language in the respective main settlement area of ​​its speakers. There are non-constitutionally recognized languages ​​in India that are spoken as mother tongue by 5, 6 or even 9 million citizens, i.e. more than the medium-sized European languages. The majority of these languages ​​can be assigned to the more than 80 Adivasi peoples, the indigenous people of the subcontinent. 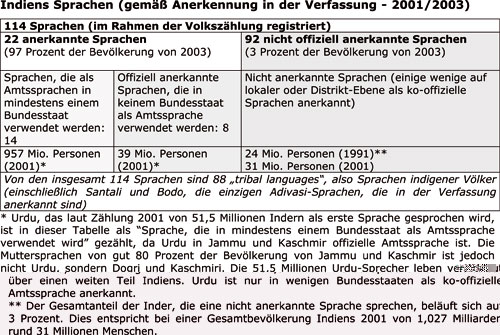 Is there a national language of India? In 2004, 42 percent of Indians spoke Hindi in combination with one of the many Hindi dialects or variants as their first language, i.e. at least 440 million Indians. Overall, around half of the population of the giant state can communicate in Hindi. As a supraregional lingua franca, however, English is far more important than Hindi, mainly because it plays a key role in social advancement and the education system and occupies more and more domains: politics, the management of larger companies and economic relations at the state level, education, research and technology . Due to its colonial history, English has a far more dominant role in India than in Europe, although, according to EU statistics, half of Europeans also state that they can converse in English. The advance of English in all areas of life corresponds to today's phase of increased internal integration and the opening of the country to the outside world, but this is by no means always beneficial to the minority languages.

In the context of the linguistic world of India, the term "linguistic minority" has to be defined very well. Since there is no uniform basic principle of the recognition of languages ​​and consistent requirements for the regulation of language rights by the federal states at the federal level, the status of a language and the essential rights of its speakers depend on the 28 federal states that are responsible for the official use of language. In the 1950s and 1960s, the state structure was renewed primarily based on linguistic criteria. What is lacking in the Indian state structure in contrast to Europe, however, are regions (on the order of the German federal states, the Spanish autonomous communities, the regions of Italy) that would be equipped with a minimum of legislative and, above all, language policy competencies. As in Europe, these sub-state units would be best suited to create a legal framework for the protection and recognition of smaller, regional languages, indigenous languages ​​and other linguistic minorities. In India, not only do the non-constitutionally recognized languages ​​(92 of 114 currently) enjoy little attention, but also some larger languages ​​sometimes have surprisingly few rights that are official languages ​​in one state and are spoken by a minority in one or more neighboring states. Konkani is recognized in Goa, for example, but is not protected in the neighboring states. The languages ​​Maithili, Santali, Kashmiri, Sindhi, Dogri and Bodo are recognized in the 6th Appendix of the Federal Constitution, but they are not the official language of any state. 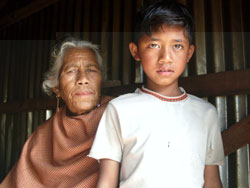 To give an order of magnitude for the language minorities: around 120 million citizens of India speak the main language of their family, a language that is a minority in their place of residence. At least 31 million Indians speak as their main language an "absolute minority language", which is everywhere in the minority. These are above all the languages ​​of the indigenous people of the subcontinent, the Adivasi. Why only 31 million when in India at least 70 million people belong to the Adivasi? This, too, is a serious result of centuries of discrimination: far more than half of the Adivasi still feel as such, but no longer speak the Adivasi language. The Adivasi are the main victims of the language decline in India. In every area of ​​life, from the education system to administration, from the media to modern business life, they are under strong pressure to assimilate.

On the other hand, it must be recognized that multilingual India spends much more effort than the EU, for example, in order to cope with its internal linguistic diversity. In Europe, command of three European languages ​​is specified as a medium-term educational goal, but the majority of the EU's population is still monolingual. This is also the case in India, but the proportion of bilingual and multilingual citizens (this is recorded in the censuses) is rising very rapidly, also as a result of the "Three-Language Formula", the official educational model for 30 years. Accordingly, every Indian child should be able to learn their mother tongue and then another two major lingua franca (mostly Hindi or the state language and English) if a child speaks an "absolute", unprotected or recognized minority language in the complex language world of India and in public life and modern media wants to participate, it has to speak not just two, but three other languages, namely the official language of the state and the two national lingua franca, Hindi and English. For the speakers of the minority languages, this means four languages. Not easy when you consider that almost 40 percent of Indians are illiterate and a quarter of the population is too poor to be able to eat adequately.

India is not only concerned with inevitable multilingualism, but also with the rights of many millions of speakers of minority languages. As the political and cultural context privileges some major languages, linguistic minorities often feel discriminated against by the current language policy of the Union and the States. They experience on a daily basis that their mother tongues are deemed worthless dialects that have little utility in modern life. Many such languages ​​have definitely disappeared, and several more are on the brink of extinction. Is this the inevitable price to be paid for economic modernization, cultural homogenization and the multilingual fabric of India's society at large?

This book is an effort to map India's linguistic minorities and to assess the language policy towards these communities. The author, a senior researcher in South Tyrol (Italy), assuming linguistic rights as a component of fundamental human rights, codified in number of international covenants and in the Indian Constitution, provides an appraisal of the extent to which language rights are respected in India's multilingual reality, which takes into consideration the experiences of minority language protection in other regions.