PARIS - Air France abandons the Airbus A380. In an exclusive interview with aero.de, airline boss Anne Rigail leaves almost no good hair about the giant aircraft, of which Air France has operated a total of ten copies since 2009. The cabins were never revised during this time - despite many announcements.

Rigail spoke about this and her strategy with Andreas Spaeth on the recent maiden flight with the Airbus A350 from Paris to Toronto. The 50-year-old has been with Air France since 1996 and CEO since December 2018. Her passion is the cabin product, which she was previously responsible for.

aero.de:It seems like the A380 has always been more of a liability for Air France than a real first choice. Would you agree with that?

Anne Rigail: I wouldn't say it was a burden from the start. I don't know if anyone could have predicted it back then, but the A350 and Dreamliner simply made the A380 completely obsolete - too expensive, too big. In flight operations it was always a very difficult aircraft, you need special handling equipment, you have to renew runways and taxiways and you need special passenger boarding bridges.

I say this because I was working at our Paris-CDG hub when the A380 arrived - it was always a problematic aircraft in everyday life. Because you even need special training for every handling employee on the apron, I've never experienced that before. In comparison, it's so easy to train people to handle A350s. But when the A380 came to Air France back in 2009, it replaced two other types of aircraft, so the balance on the cost side wasn't too bad.

Because the efficiency of the A350 and the 787 is just as high, but with less capacity and greater flexibility, they can be used on all routes. So the A380 is simply no longer useful. And we have a lot of problems with it - the structure, the engines. And not just now that the planes are getting older. It's always been difficult with the A380.

aero.de: But the A380 still gets positive reactions from passengers ...

Rigail: Yes, customers still love this aircraft. It's quiet, it's big, it's beautiful. I like to watch the A380 in the morning when it takes off. But we now see them as a limitation, but it's also a bit sad that Airbus is now stopping production. 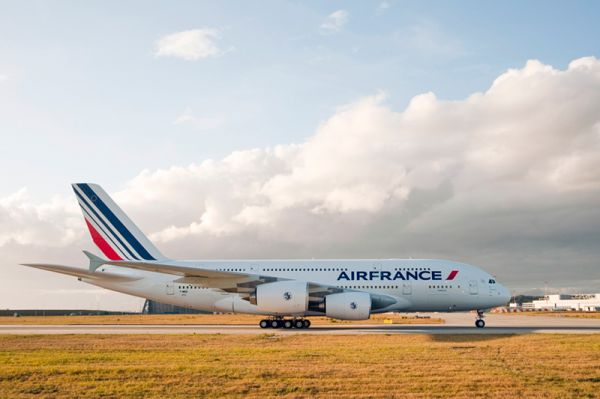 Air France Airbus A380, © Air France
We still like this plane, but there is no point in keeping it if we are pursuing our strategy: it can only be used on the routes with the highest traffic. The investment for the renewal of the cabins would be huge - it would cost us 35 million euros per aircraft, I did the analyzes myself.

aero.de:Air France always promised that the modernization of the cabins from 2009 would start "soon" ...

Rigail: Yes, I said that myself and we were determined to do so. But when you look at the total investment required and add the upgrade plus the major maintenance incidents that are coming up, the costs are so high that we believe it is better to renew the fleet. It will just pay off to have new generation aircraft in the years to come. I think the A380 is just outdated now.

aero.de:Air France continues to order Airbus aircraft, most recently the A220, are you also thinking of the A321XLR?

Rigail: Half of our medium-haul fleet will consist of Airbus A220s, of which we will receive a total of 60 between 2021 and 2025. The other half will be existing A320 and A321s that we will keep. The decision-making process on how to eventually replace this older half of the fleet is underway. We haven't decided yet, but the A321XLR is an option.

We know this is a fantastic plane. It would open up completely new markets for us. We look at that with a very special focus and do our studies. It would replace the older half of the fleet and would be a flexible aircraft. However, this does not yet have a short-term priority; it is the replacement of the A318 and A319 with the A220. This is the first step.

The next step will be to replace the A380 - we are currently investigating which aircraft would be suitable. Half of our fleet will be renewed by 2025. That's a lot of planes, and that investment creates tremendous pressure. Therefore, our focus is on reducing our fixed costs.

aero.de:But Air France is also currently in a process of transformation anyway ...

Rigail: We have to reshape an old airline with all of its management levels in order to achieve more efficient processes in our operations. What is new is that we want to shape our new organization and changed processes by involving the people who deal with it on a daily basis. This is a complete change of culture.

And it's not just Air France that is making a cultural transformation here. All large companies in France have the same goals: to work faster, to digitize more and to change the decision-making processes.

aero.de:KLM appears to be way ahead of Air France in all of these areas. When do you expect Air France to be able to meet KLM on an equal footing?

Rigail: I expect our core profit margin to match that of KLM by 2024, within five years.

But the question remains whether, in the economic context of France, we will even be able to close the current gap between Air France and KLM, with this level of taxes and social security contributions.

To bridge this gap, we need a joint strategy with the French government for the national transport sector. We have just experienced two airline bankruptcies (Aigle Azur and XL Airways, ed.) And will soon have a new eco-tax, just like in Germany.

But we have to work with the government to level the playing field.

aero.de:Air France has taken over all of the group's A350 orders. Aren't there any more such previously unused synergies with KLM?

Rigail: This is an example of fleet simplification. This swap was a good move, although we are also keeping the 787 in our long-haul fleet, which is large enough for different types of aircraft. We are getting rid of the A340 and A380 and the A330 and A350 remain. And of course our large Boeing 777 fleet plus a total of ten 787-9s by the beginning of 2020.

With only three groups of cockpit crews, this will be much more efficient than it is now. In many other areas at both companies, but also for me personally, we experience synergies every day.

Comments (15) Go to the homepage

Lufthansa, for example, did not need the plane from the start. After the hype about the plane was over, the occupancy rate was and is very poor. Why else is LH taking 6 pieces out of service in 2021 ??? But politicians wanted the plane in LH colors ... Other EU airlines went out like this ... A380 is something for Emirates and co. And if you add everything up, you get the result that we finance airlines like Emirates with our taxes ...

Again a connoisseur, but everything judged from today's glasses. Yes, one would have known then.

In addition, it was forgotten to mention in the post that so far the A320 series and 330/340 series have washed back more money than they received as development credit. Think that should be mentioned, because declaring everyone stupid is easy if you just don't mention certain things.

After the hype about the plane was over, the occupancy rate was and is very poor. Why else is LH taking 6 pieces out of service in 2021 ???
The utilization is not that bad. You can still earn money with the A380 on the right routes. But if I should invest in a new engine for a 12 year old car, I think about whether it will still pay off. The A380s are now facing a major overhaul. Or why does LH discard 6 pieces and not all 14?

Lufthansa, for example, did not need the plane from the start. After the hype about the plane was over, the occupancy rate was and is very poor. Why else is LH taking 6 pieces out of service in 2021 ??? But politicians wanted the plane in LH colors ... Other EU airlines went out like this ... A380 is something for Emirates and co. And if you add everything up, you get the result that we finance airlines like Emirates with our taxes ...