Tamil has a relationship with Sanskrit 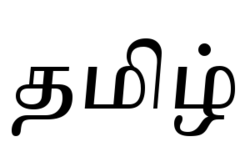 Lettering in Tamil for the word "Tamil"

The Tamil script is used to write Tamil, a Dravidian language that is mainly spoken in parts of southern India in the state of Tamil Nadu and on the island of Sri Lanka. The Tamil script has a similar structure to the Devanagari script. It is a phonetic script that follows the letters of the Sanskrit alphabet, but has developed its own characters.

The Tamil script, like the Devanagari and all other Indian scripts, is a syllable script that goes back to the so-called Brahmi script. The alphabet of the Tamil script was created on the basis of the Granthan script and thus follows the strict phonetic arrangement of vowels (vowels) and consonants (concurrent sounds) of the Sanskrit alphabet.

Of all vowels (with the exception of the two diphthongs ai and ouch) there is a short and a long variant. This is where Tamil differs from Sanskrit in that this is also a short and a long one e or. O exists, while in Sanskrit these two vowels are always to be spoken long. In Tamil again the syllable is missing ṛ (ऋ say: ri) and ḷ (ऌ say: left).

In scientific transliteration (IAST), the length of the vowel is indicated by a horizontal line above the vowel. Depending on the phonetic environment, some vowels are pronounced differently. These Allophone The pronunciation variants mentioned are shown in the following table according to the International Phonetic Alphabet (IPA). These vowel characters are only used at the beginning of a word.

The consonants also follow the phonetic arrangement of the Sanskrit alphabet according to the point of articulation in so-called classes (Varga). An important difference between Tamil and most of the North Indian languages ​​is the lack of breathed (aspirated) sounds (kh, gh etc.). On the other hand, Tamil has three consonants that do not exist in Sanskrit (ḻ, ṟ and ṉ).

In the Tamil script, there is no distinction between voiceless and voiced plosives (k vs. G etc.) are different. With regard to correct pronunciation, the sound environment decides whether the consonant is pronounced voiceless or voiced. The corresponding pronunciation options appear in the following table again according to the International Phonetic Alphabet (IPA).

Special characters from the Grantma script

These regular consonants of the Tamil script are joined by some characters adopted from the Granthan script. These are used to write loan and foreign words from Sanskrit and modern languages.

*Phonetic transcription according to the International Phonetic Alphabet.

In all Indian syllabary scripts, consonants and vowels are not written separately, but are combined to form a syllable symbol (Akshara). In the following overview, all possible combinations of க் (k) with the individual vowels.

A point above the consonant signals - like the Devanagari sign called Virama - that no vowel follows. If the point is missing, there is a short one after the consonant a spoken: க் = k, க = ka. All other vowels are written "around the consonant" by means of appropriate signs, i.e. partially placed after, in front, written above or below: கா = kā etc.

Many loan words from Sanskrit have flowed into Tamil, whereby they have been adapted to the usual spelling and pronunciation conventions there. Typical for originally masculine and neuter Sanskrit words that end in short -a end is the ending of the word -at the in Tamil. Originally female Sanskrit words ending in long -ā have the ending instead in Tamil -ai.

In addition to Tamil and Devanagari, other Indian scripts can also be displayed with this font converter:

08/08/2021 - 13/08/2021 - Learn harmonium and kirtan in the classic Indian style
This is a great unique opportunity to learn harmonium and kirtans with healing Indian ragas from a professional Indian Nada master and Sanskrit scholar. You learn -…
11/05/2021 - 11/07/2021 - Sanskrit
You will learn the basic principles for the correct pronunciation of mantras and common yoga terms, the structure of the Sanskrit alphabet and the characters (Devanagari). So is this week ...

Learning the Devanagari script to correctly pronounce the mantras.