What is GDP PPP

The concept of purchasing power parity is mainly used in two different contexts:

Because purchasing power in different economies and thus in two currency areas can vary greatly from one another, a simple measurement of GDP at current exchange rates is not sufficient for comparability; it would represent a GDP measure distorted by exchange rate fluctuations. We are interested in this in connection with the explanation of GDP.

In this case, however, the idea of ​​a uniform price is less important than the application of purchasing power parities: that is, we want to be able to compare the economic indicators of different countries and different currencies with each other. Because in order to put the national income of different countries in relation to one another in a meaningful way, it is not enough to simply convert the total economic output into another currency and express it in it. This would mean that the different purchasing power levels in the countries would be ignored.

The approach of purchasing power parity is based on the fact that the nominal comparison of two incomes in two different countries says nothing about how much one can afford from this income, i.e. how high the associated purchasing power is. This in turn has something to do with the price level in the respective countries.

The American earns $ 2,500 a month and the price of a loaf of bread is $ 0.5. So theoretically she can afford 5,000 loaves of bread with her income. Suppose a German earns 4,000 euros. If you were to simply exchange the 4,000 euros at a nominal exchange rate of around 1.45 dollars per euro, we would get 5,800 dollars. So it seems that the German is richer than the American. So far so good. Assuming, however, a loaf of bread costs 1 euro in Germany, then a German can only buy 4,000 pieces of bread, while the American, as shown above, can afford 5,000 pieces. Converted to purchasing power parities using the example of loaves of bread, this results in an exchange ratio of 2 (1 euro / 0.5 US dollars). According to purchasing power parities, a German earns the equivalent of only 2,000 dollars (1US $ = 0.5 euros), which is due to the higher price level in Germany compared to the USA. The income of the German has a lower purchasing power.

For the comparison For economic key figures, a conversion and comparison of exchange rates according to the PPP (mostly in comparison to the US dollar) is therefore common. 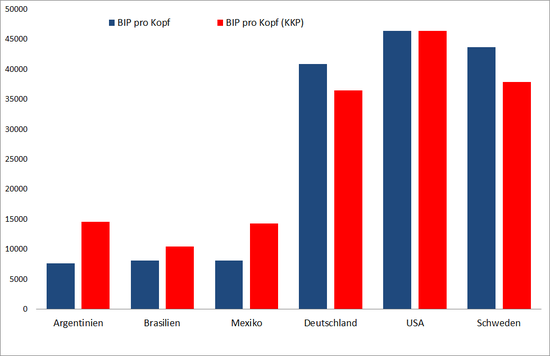