Money is the root of all evil

Knowledge is power - but knowing nothing does not matter either.

That is certainly not our motto. You have to invest time and money to get more knowledge. You can only spend a pleasant time with enough money. Earning money is associated with work unless the money works for itself. But then it takes enough time so that you can live well off the income - without having to work yourself. Knowledge or just luck (?) Is a prerequisite for having capital work in the right place.

It is well known that engineers and scientists never make as much money as many businessmen and many politicians. Now there is the mathematical proof for this: 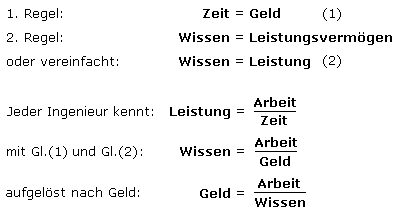 Now it can be seen very clearly: When the knowledge tends towards 0, the result, money tends towards infinity, no matter how much work is done. Result: the more knowledge you have, the less money you make!

A finding that, according to A. Einstein, can be mathematically proven as follows:

Money, the root of all evil

When a person chases money, he is greedy for money. If he saves, he is considered a curmudgeon. If he spends it, he is reckless. If he doesn't make an effort to deserve it, he lacks ambition. If he has it without working, he's a parasite. But if a person has made hard work for a long time, they are called an idiot and are accused of not having lived.
(After Sandra Fernandez from Portugal)