Parliamentary election in Sri Lanka: of ghosts and elephant hair

Astrologers and pollsters send mixed signals ahead of the general election. Many fear the return of ex-President Rajapaksa. 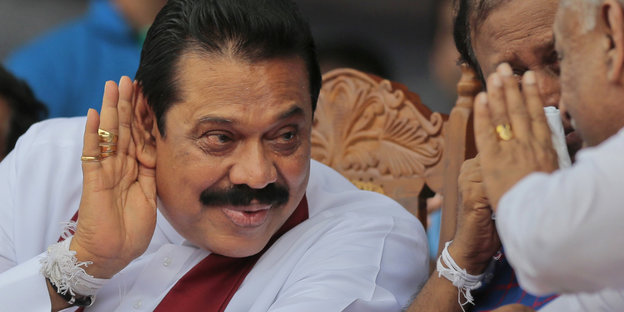 The former general and ex-president Mahinda Rajapaksa is considered authoritarian and brutal. Still, he has a chance. Photo: ap

DELHItaz | Sri Lanka's former president, Mahinda Rajapaksa, is known for his belief in the power of the psychic. For a few weeks now, in addition to the well-known gemstone rings, he has also been wearing a bracelet made of elephant hair on each finger - traditionally used in Sri Lanka to ward off evil spirits.

Rajapaksa has good reasons to secure any support as he hopes for a political comeback in the parliamentary elections on Monday. But unlike in the presidential elections in January, which he surprisingly lost to his former health minister Maithripala Sirisena, not only the astrologers send mixed signals, but also the opinion polls.

Should Rajapaksa's United People’s Freedom Alliance (UPFA) win a majority on Monday, the brief political springtime that began in January with Sirisena's election to the presidency could already be over. In this case, Sirisena has already announced that he will not appoint Rajapaksa as prime minister. Majority or not.

According to a poll by an independent think tank in Colombo, Sri Lanka's Tamil and Muslim minorities, who caused Rajapaksa's defeat in January 2015, continue to support his rival, Prime Minister Ranil Wickremsinghe and his United National Party (UNP). The Sinhalese majority, on the other hand, is 36 percent in favor of Rajapaksa, compared to 31.9 percent for Wickremsinghe. Overall, however, only 27.5 percent of the citizens want Rajapaksa to be prime minister, while 40 percent want Wickremsinghe.

Rajapaksa, who is credited with militarily crushing the insurgent "Tamil Tigers" and ending the more than 25-year civil war in Sri Lanka, had lost much of his popularity at the end of his ten-year term.

His authoritarian style of government, nepotism, attempts to intimidate journalists and opposition activists, and persistent human rights violations against the Tamil minority had discredited his regime. Sirisena's election signaled a political awakening on the tropical island. But in the past few months, according to political observers, the 63-year-old has become increasingly entangled in the thicket of complicated party politics in Sri Lanka.

According to a report by the International Crisis Group, Sirisena was able to initiate “robust debates and criticism” and “important government reforms”. For example, a constitutional amendment that has curtailed the president's power.

But he failed to gain control of his Sri Lanka Freedom Party (SLFP), which is the largest party within the UPFA. His attempt to persuade the SLFP, which has so far had a large majority in parliament, to form a coalition with Wickremsinghe's UNP met resistance from the old guard and enabled Rajapaksa's return as the UPFA's top candidate.

The political awakening of Sri Lanka and the reconciliation with the Tamil minority are up for election on Monday. Because Sirisena's reform course and the investigation of human rights violations during the civil war are hardly imaginable with the Sinhalese nationalist Rajapaksa as prime minister.