"India has won. There are good days to come," tweeted Narendra Modi shortly after his party saw a landslide victory in the Indian parliamentary elections. The Bharatiya Janata Party (BJP) won an absolute majority: 283 out of 543 seats. The election result of the BJP exceeded all projections. The previous ruling party suffered a crushing defeat. The Congress Party, which has been in every government since 1947, dropped from 163 to 43 seats.

"A truly historic result," says Milan Vaishnav, South Asia expert at the Carnegie Foundation in the USA. The BJP's achievement of an absolute majority is an unprecedented victory. For the first time since 1984 a single party has managed to achieve an absolute majority in India. And it is also the first time that a government without the participation of the Congress Party will run the business of government in New Delhi. 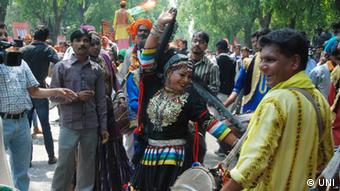 BJP supporters celebrate on the streets after the election victory

The result surprised many observers. They were certain that the BJP would miss an absolute majority and would therefore have to rely on the support of several regional parties. Their argument was supported by the fact that the largest democracy in the world has been ruled by coalition governments without exception for 30 years.

Parties that were assigned an important role in forming a government after the election failed at the polls. The Aam Aadmi Party (AAP), for example, which declared war on rampant corruption, experienced a debacle. She only won four seats. The predictions that India would be ruled by a fragmented parliament after the elections were not confirmed by the election results.

The clear election result gives the future Prime Minister Modi a strong government mandate. In the election campaign, the BJP relied primarily on economic successes that Modi had achieved as prime minister of the state of Gujarat. Modi has also promised to create millions of new jobs and fight persistently high inflation. The BJP promised to repeat the successes nationwide if it won the elections. "With a mandate this strong, people will expect Modi to deliver quickly," said Vaishnav. 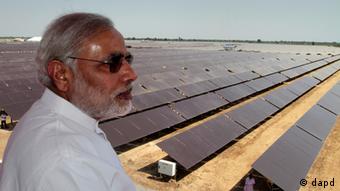 Rajiv Biswas, chief Asian economist at the HIS research center, believes Modi now has the leeway to initiate a series of much-needed reforms that can help India's ailing economy on its feet. "The victory of the BJP is likely to result in a renewed strength in the Indian economy. The gross domestic product could well rise to eight percent by 2017."

The markets have already reacted positively to the choice of modes. The Indian benchmark index Sensex rose by six percent to an all-time high of 25,375 points. The Indian currency has also appreciated, especially as a lot of foreign money is entering the country. Investors are counting on Modi's government to initiate an economic reform and liberalization process.

Michael Kugelman, South Asia expert at the Woodrow Wilson International Center, is skeptical. Despite the election victory, it will be very difficult for the BJP to cope with India's problems. "The BJP has been admired for large infrastructure and development projects in Gujarat. They want to repeat that for all of India. But that will be very difficult because of the deteriorating economy," said Kugelman in an interview with Deutsche Welle.

Political analyst Vaishnav shares this view. "It will be difficult, if not impossible, to repeat Modi's model at the national level, because New Delhi has only limited power over the states and the boundless bureaucracy. Last but not least, Modi depends on the cooperation of the states." Modi will have to make compromises that he did not have to in the past twelve years when he was prime minister of Gujarat state.

According to many experts, the BJP's foreign policy program will focus primarily on its immediate neighbors, particularly Pakistan and China. "Modie's main goal will be to bring these countries closer to India through economic cooperation," says Kugelman. "Modi hopes to reach an economic agreement with Pakistan that will make both nations preferred trading partners."

Apart from the immediate neighborhood, it can be assumed, according to Kugelman, that the BJP will further deepen the existing good relations with Japan and Russia. Relations with the US, which are not in good shape anyway, would not improve with Modi's clear victory. Washington only recently refused the Indian politician a visa on the grounds that he was involved in the 2002 anti-Muslim riot in Gujarat. But the Obama administration had already signaled that it would work with India's new prime minister if Modi won the election. Kugelman says: "Relations between the US and India are just too important for Washington to be sidelined by the visa affair." Just hours after the election results, the White House made a warm welcome to Modi in a statement.