What are the Antifa in Portland

It's just after 9 p.m. and a crowd fills Chapman Square, a park that stretches over two blocks and lined with ginkgo trees and park benches. "They should be afraid of us, not us of them," says Jeff. By "they" the slim black man means the police. Jeff has come back for a demonstration against police violence in downtown Portland. It should be around his thirtieth, says Jeff.

The protests began in Portland almost two months ago. Since then, there have been daily demonstrations for black victims of police violence in the United States. One of the protesters' main demands: budget cuts for the police.

So far this evening, nothing has been seen of the local police or the special forces that US President Donald Trump has ordered to Portland. But it is not a question of whether the officers will move out, but when. And whether they give the order to leave the place beforehand over the loudspeaker or start without warning. The direction from which the police officers and special forces come seems to be well known. Usually they are inside the building, says a protester and points to the houses across from the park, two courthouses and the Justice Center, which houses the police station and a prison.

"We have to make the police uncomfortable"

While more than a thousand people keep shouting "Black Lives Matter", Jeff, who works as a janitor in a school, tells about his membership in ADOS, the political organization of the descendants of American slaves. The ADOS calls for the abolition of the police in their current form and also calls for reparations payments to black Americans whose ancestors were forced into slavery. Protester Jeff outside the Portland Courthouse

"The people in the US have been far too docile so far. We are not using the power we have." Civil disobedience, such as demonstrators setting trash cans on fire, throwing water bottles or trying to dismantle barricades, is effective and necessary, says Jeff. The constant alert to which the police are exposed is very common for black people. "This is how blacks feel around the clock. We have to make the police uncomfortable so that they know we are serious."

Graffiti and property damage are the official reason US Federal Police Special Forces were sent to Portland. They are supposed to protect buildings and monuments. However, they reportedly mingle with demonstrators in plain clothes, take people into custody without officially arresting them, and use tear gas and rubber bullets. 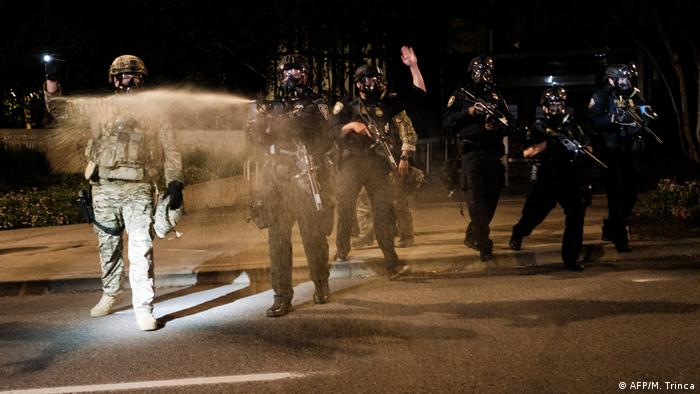 The pictures of the police action deter many Portland residents from participating in the protests. But those who go are now a well-rehearsed team. However, they do not look like a "violent mob" - as the acting US Secretary of Homeland Security Chad Wolf describes it.

Volunteers block the intersections around the park in the evening so that motorists do not drive into the protest crowd. On one corner there are bearded white motorcyclists who have glued the letters BLM, for Black Lives Matter, on their machines. On another corner are two white women who have parked their bicycles across. One is a primary school teacher, the other organized bike tours before the pandemic. "I'm not the type of person who likes to be confronted with tear gas," says the teacher with a smile. "When the police come and make their nightly announcement that the place will be vacated, I'll go home like most of the others." The larger the crowd, the longer the police would wait. The young woman is said to be right: the police will not vacate the place until after midnight that night.

Leaving the square is sometimes not that easy because the police are blocking the streets and won't let anyone through, reports Carey, who knows and is the mother of two children, one of whom serves in the army. "We are then more or less trapped." And that's how the scenes would begin that ended in unequal street fights in the early hours of the morning. 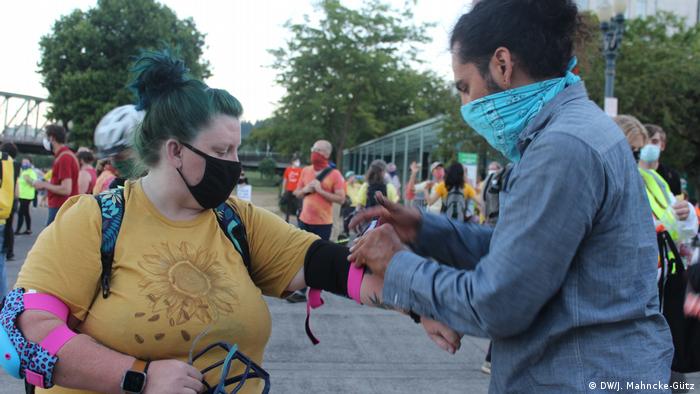 Carey can be equipped by volunteers

Carey has been participating in the "Wall of Mothers" for a few days: initially around 30, now hundreds of mothers, mostly white women, stand arm in arm in front of the demonstrators every night to protect them from the police. "Yesterday we didn't even block a street. Nobody looted, there were no riots and suddenly a vehicle with police officers in full riot gear came around the corner. They threw flash and noise grenades and then the tear gas came."

This also explains why many protesters look like they are part of a toy army. In order to protect themselves from police measures, they wear bicycle helmets, swimming goggles, ear plugs, knee, hand and elbow protectors - as well as self-made wooden signs or lids on salad bowls in addition to the obligatory mask.

Portland is not in chaos

The members of the Antifa who mingle with the crowd are better equipped, for example with gas masks. The self-declared goal of the anti-fascist group: to document the activities of neo-Nazis and to protect other demonstrators from right-wing attacks. The decentralized and anonymous group has existed in Oregon since 2007. 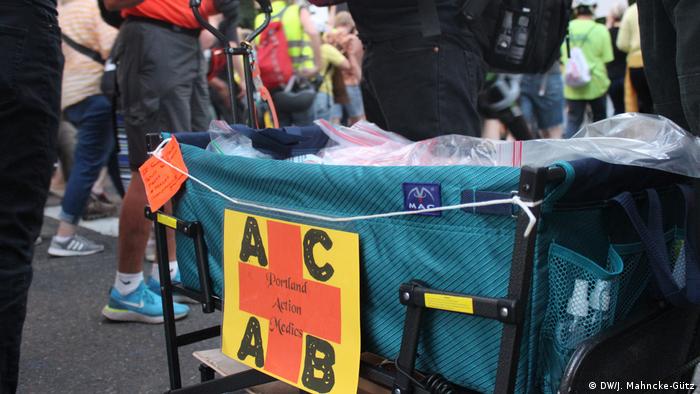 At stations like this one, volunteers hand out emergency kits against tear gas

Despite anti-fascist activists wearing gas masks: Portland is by no means sinking into chaos, as some politicians put it. The protest has only arrived in everyday life. Apart from the daily demonstration in front of the Justice Center, numerous other actions against police violence and racism take place in Portland: weekly car parades, poster actions on street corners, art exhibitions, rallies in parks or online readings. In the windows of many shops, theaters, cafes or yoga studios, posters that support the Black Lives Matter movement hang in the windows.

And in the parks, on the fringes of peaceful rallies, residents continue to walk with their children and dogs. So on this evening: Just one block away, hungry people, completely unimpressed by the loud demonstration next door, pick up their ordered food from a Vietnamese restaurant.