Diwali, also known as the Festival of Lights, is the most important festival for all Hindus, including India. Diwali is an abbreviated form of "Deepawali" and means something like "swarm of lights" or "arrangement of lights". People light lights in their homes, shops and in the streets weeks and days in advance. It brings families and friends together to pray, celebrate and relax - so it's all a bit like Christmas in the West! People also see the festival as the beginning of a new year and therefore bring their houses up to scratch, invest in new businesses and close with old problems, so that they can start the new year free of old burdens. In this article we explain why, when and where the famous festival is celebrated! If you want to experience Diwali up close, plan your trip with us! 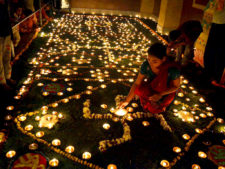 The traditional lighting of the diyas, the oil lamps, Credit: India Today

Why is Diwali celebrated?

Diwali marks the beginning of a new year in the Hindu calendar. It celebrates the return of the god Rama from his fourteen-year exile in the woods after he defeated the ten-headed demon king Ravana, who kidnapped his wife Sita. Hanuman (the monkey god) and Laxman (the younger brother of Rama) are other important characters in Ramayana, the story of Rama, Sita and justice. It symbolizes the victory of light over darkness, good over evil and hope over despair. That is why it is also called the Festival of Lights. The Hindus basically turn the night into day with millions of lights in this joyous celebration. 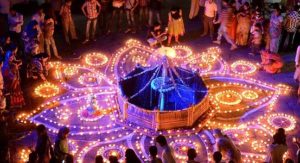 Diwali, the festival of lights, is a festive and reflective time to visit India!

When and where does Diwali take place?

Diwali day is the full moon between late October and early November. The celebrations last for five days, with Diwali being the third and most important day. Here is an overview of the exact Diwali dates for the coming years: October 27, 2019, November 14, 2020, November 4, 2021. Diwali is celebrated by Hindus throughout the country and in almost all regions. In Kerala, on the other hand, the festival is not celebrated as big as in the rest of the country, as they instead celebrate the Hindu festival Onam and the goddess of happiness, beauty and wealth Lakshimi is less and less worshiped. Take a look at our tour ideas through North India to find out how you can plan your trip around the festival. 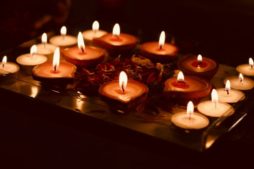 How is Diwali celebrated?

The celebrations begin on the first day with dhanteras. On this day, the Indians clean and decorate their houses and prepare for the festival. It's also one of the best days for retailers as new clothes are bought for the festival. The preparations continue on the second day, but officially it is the first day of the rituals and thus the first small rituals, the so-called pujas, are celebrated. Rangolis, art patterns made of colored powder and flour, also decorate the front doors to greet the respective guests during the Diwali. After all, the third day is Diwali and the most important day of the festival. Families and friends meet to exchange gifts and light diyas, small oil lamps that glow all night. Later that night, people take to the streets and light fireworks and firecrackers to celebrate New Year's Eve. The day after, on New Year's Day, relatives and good friends visit each other and exchange sweets and gifts. The fifth day of the festival (the second day of the new year) and finally the last day is called ‘Bhai Dooj’ and is dedicated to the brothers. On this day the sisters cook for their brothers, put ‘teekas’ (red dots) on their foreheads and in return receive blessings and solidarity. 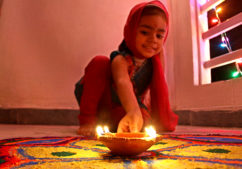 Big or small, everyone takes part in the celebrations. - Credit: Anil Shakya

Where is the best place to celebrate Diwali?

A homestay in North India is the perfect place to experience Diwali in India. So you can go to Varanasi and watch the Aarti, a Hindu fire ritual on the Ganges River, and let off fireworks. Jaipur's markets are fully lit and are an absolute highlight during Diwali. Goa is known for the burning of figures of the demon Naraka during Diwali. The city of Amritsar, although the majority of the population is Sikhs, is also known for its Diwali celebrations, especially in the Golden Temple. As you can see, it doesn't really matter in which part of North India you celebrate, it is only important that you do not travel on Diwali day, if possible stay in a homestay with a Hindu family and not in a large anonymous hotel. So you can enjoy the Festival of Lights in all its glory!

Travel during Diwali and safety instructions

Diyas (oil lamps) and firecrackers are everywhere during the festival, so be careful that your clothes don't catch fire, especially light fabrics such as traditional Indian clothes and scarves are easily flammable. It is also a good idea to wear earplugs during the Diwali festival in India, especially if your ears are sensitive. Some firecrackers are extremely loud and sound more like small explosions. The noise can be harmful to hearing. There is also a lot of smoke in the air, which can make breathing difficult. Pay attention to your safety during fireworks and always move away from fireworks quickly after lighting. Particular attention must be paid to children! We hope you have a safe and unforgettable Diwali!

Also, if you want to travel to India during the Diwali season, make sure to book well in advance. Train tickets, accommodation, guides, flights, everything becomes more difficult and expensive during Diwali. Accommodations in popular travel destinations are often booked out months in advance. The train tickets are also booked up quickly, as everyone travels to their loved ones for the festival.

You don't know how to integrate the Diwali festival in India into your travel plans? You don't know if it is already too late to make a booking? We often make this impossible, plan your trip with us now! 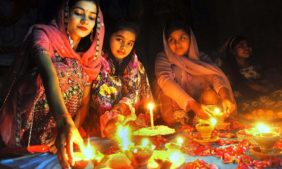 Diwali, the festival of lights, the biggest holiday for Hindus.