Why are relationships in India so complicated

In Brussels, Indian Prime Minister Narendra Modi and the EU negotiating partners gave nice speeches on a possible restart of relations between the two major economic areas. They shook hands amicably in front of the Indian and EU flags. "The EU is one of India's most important strategic partners," said India’s Prime Minister Modi. And in the EU's papers, too, there is a lot about the strategic partner India, with whom, however, they had not met for four years.

At the same time, EU member Italy initiated proceedings against India at the International Court of Arbitration in The Hague. It is about the fate of two Italian naval soldiers who allegedly murdered two Indian fishermen off the Indian coast in 2012. India wants to bring men to trial. Italy denies that Indian courts have jurisdiction at all. One of the men lives under house arrest in the Italian embassy in New Delhi, the other was able to travel to his homeland for medical treatment, but theoretically would have to return to India soon. Italy's Prime Minister Matteo Renzi is under heavy pressure at home to finally help the two soldiers. That is why he probably chose the day of the EU summit with India to file the lawsuit.

The atmosphere during the already not very easy talks in Brussels between Indian Prime Minister Modi, EU Council President Donald Tusk and EU Commission President Jean-Claude Juncker did not improve, according to EU diplomats. An originally planned press conference was canceled. Both sides want to expand trade relations between India and the 28 EU countries, but as long as the dispute with Italy is not resolved, there will be no formal agreements. There had been no summit meeting between the EU and India since 2012. The situation is also complicated by the fact that Federica Mogherini, the EU foreign policy chief responsible for relations with India, is Italian. The Indian side had accused Mogherini of blocking and preventing a new beginning. Before joining the EU Commission, Mogherini was Foreign Minister in Rome and therefore directly responsible for the two Italian citizens in India. 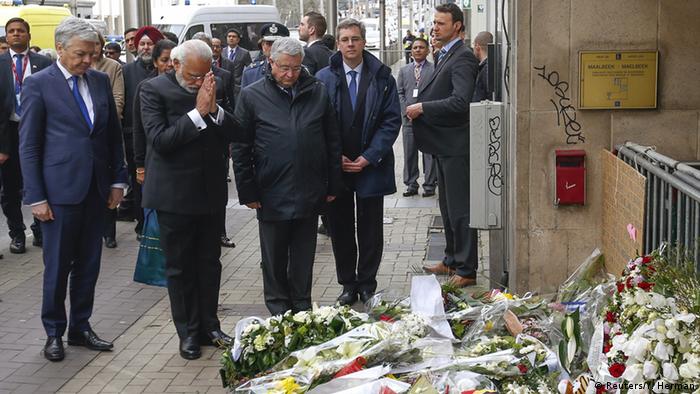 Premier Modi (2nd from left) lays a wreath for victims of terrorism: An Indian was also murdered in Brussels

But even before the incident with the Italian sailors, the negotiations for a free trade agreement were tough and protracted. There are a number of unanswered questions about tariffs, market access, investor protection and intellectual property. The European auto industry, for example, wants to get rid of India's high import tariffs for its products. There is a huge market for cheap cars in the emerging country with 1.25 billion inhabitants. With the tariffs, India is protecting its carmaker Tata, which has been run by a German manager since this year.

India also wants to keep producing cheap drugs called generics. These are basically inexpensive copies of European brands. The EU is calling for improvements in patent and property protection. In addition, the EU had withdrawn 700 generic drugs from India because it had doubts about the medical studies that were submitted when the approval was granted. India criticizes this approach and demands new approvals.

In other areas it has been possible to dismantle customs barriers. India specifically wants better market access for its software products and IT engineers in Europe, said EU expert Rajendar K. Jain from Nehru University in New Delhi to Deutsche Welle. After only two hours of talks in Brussels, the EU and India said they wanted to resume free trade talks. In addition, there is an intensive dialogue on issues of climate protection, transport and energy policy and the fight against international terrorism. More specific agreements were not made. 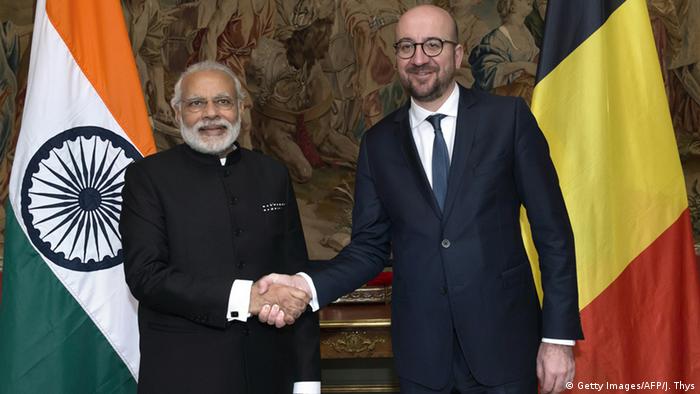 The German economy hopes that relations with India will be revived for good business. "A free trade agreement between the EU and India could be a milestone in opening up the Indian market to German industry. India is an important growth market, but still with high market access barriers," said Stefan Mair from the Federation of German Industries (BDI) in Berlin . The EU is already India's main trading partner. According to the EU Commission, the volume of trade for imports and exports is over 70 billion euros per year.

A success of the free trade negotiations with the huge market depends on the settlement of the dispute with Italy as well as on other procedures. An Indian court sentenced Estonian and British citizens to prison terms in January for violating India's gun laws. The men were deployed as security forces on a ship to protect against possible pirates off the south Indian coast. Britain and Estonia could block agreements with India as long as these cases are not satisfactorily resolved.