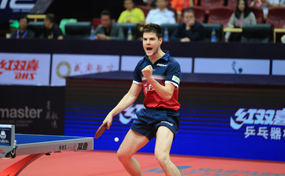 06/25/2017 - There are games that actually didn't deserve a loser. The men's final of the China Open between Dimitrij Ovtcharov and Timo Boll could well fit into this category, because both showed an extraordinary performance on the last day of the Chengdu tournament and let the final slosh back and forth. In the end, it was Ovtcharov who initially fended off four match points and then used his first. He won the China Open title alongside Ding Ning.

National finals are now the rule at large table tennis tournaments. After all, the Chinese are so dominant that the stars from the Middle Kingdom are usually among themselves in the semi-finals. The men's final of the China Open was also played between two players from the same nation - but this time between two Germans and not the Chinese, who had prevented the usual constellation themselves through their boycott in the second round. Dimitrij Ovtcharov and Timo Boll were the two players in Chengdu who took advantage of this rare opportunity to reach a final of the China Open and formed the domestic German final.

With players who know each other as well as Boll and Ovtcharov, a lot depends on how well they are on the day. In the Champions League final between Düsseldorf and Orenburg a month ago, it was Ovtcharov who was just 3: 2 ahead in the end, and the ITTF record with 5: 4 also pointed slightly in the direction of the better placed in the world rankings . Today's meeting between the two friends was also close. The very first set was so fiercely contested that it only went to 'Dima' at 5:15 p.m. His older colleague hit back on his preferred side of the table - because of the wind conditions in the hall - and was already promisingly in the front in the third set, but was caught in extra time. The important fourth round was also very close, but when the score was 7: 9, Boll took the time-out, but could not prevent Ovtcharov from making the next point. He then lost two set balls and took the time-out at 10: 9 - a smart move, as it turned out, because one point later he had extended his lead to 3: 1.

But whoever suspected a preliminary decision of the game was taught otherwise by Boll. The 36-year-old fought his way into the decisive set, where everything was open again, but Boll had the psychological advantage of having made up a 1: 3 deficit. Ovtcharov was not impressed by this and switched sides with a 5-2 lead, which Boll immediately caught up on his favorite side. So it was the older one who earned four match points. But such a simple ending did not suit this final thriller. Ovtcharov showed an incredible strength of nerves, fended off all four and immediately secured his first match point, which he also converted immediately. This extraordinarily exciting game went to Dimitrij Ovtcharov, who can now call himself the China Open winner. "Timo would have deserved the win at least as much," said 'Dima'. "At 6:10 I took the full risk six times in a row and scored six times. That is unique." Of course, the loser had to nibble on this phase of the game afterwards. "It was bitter to have to hand over the decisive set after 10: 6. In sets one and three I hadn't used my lead," explained Boll. "Dima then risked a lot and hit everything. This courage was rewarded. It's a shame, but overall it was a good tournament for me."

In the women's category, the title went to world champion Ding Ning with a clear 4-1 victory - we will still remember the name Sun Yingsha. The only 16-year-old, who is not in the world rankings, not only surprisingly won the Japan Open last week, but also reached the finals in China without giving up a single set. In doubles there was a new edition of the World Cup final between Ding Ning / Liu Shiwen and Chen Meng / Zhu Yuling. In Chengdu, too, Ding / Liu were in the lead in the end, but this time it wasn't as close as in Düsseldorf and the world champions won in four sets. In the men's category, Jin Ueda / Maharu Yoshimura stopped their young teammates Tomokazu Harimoto / Yuto Kizukuri and took the title 3-1.

The finals at a glance: